EU said to be considering plan in event of Greek exit 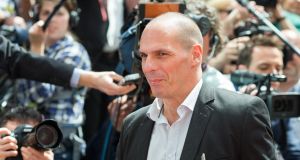 Yanis Varoufakis, Greece’s finance minister, said he is counting on a Monday meeting with his euro-area counterparts in Brussels to establish a “good paving stone” toward the release of the loans his country is seeking to avert a default. (Photograph: Jasper Juinen/Bloomberg)

Euro-area governments are considering putting together an aid package for Greece to cushion the country’s economy if it was forced out of the euro, according to sources.

The Greek government doesn’t expect to need that help. Prime minister Alexis Tsipras says he’s not considering leaving the currency bloc and is focused on getting the aid he needs to avoid a default. But even so, European officials are considering mechanisms to ring fence Greece both politically and economically in the event of a euro breakup, in order to shield the rest of the currency bloc from the fallout, a source said.

“There is always a plan B,” Filippo Taddei, an economic adviser to Italian prime minister Matteo Renzi, said on Tuesday, without referring to the aid package specifically. “But you have to ask yourself who has the ability to step in in that event. And I think if you start making up a list you realize very quickly that that list is very short.”

While euro-area finance ministers welcomed the progress Greece has made toward qualifying for more financial aid at a meeting in Brussels on Monday, policy makers are still concerned Mr Tsipras may not be prepared to swallow the concessions necessary for a disbursement. Before any payment will be made, Greece has to submit a comprehensive program of economic reforms, win approval from its creditor institutions, secure the endorsement of euro-region finance ministers and then get past parliaments in Berlin and elsewhere.

Finance minister Yanis Varoufakis said on Monday his country will run out of cash within a couple of weeks unless it gets help. Michel Reijns, a spokesman for Dutch Finance Minister Jeroen Dijsselbloem, who leads the meetings of euro area finance ministers, said he had no comment to make.

Doubts about Greece Mr Tsipras has already passed an end-of-April deadline to submit his reform plan that was set when officials agreed to extend the country’s bailout program in February. A meeting in Riga, Latvia, last month ended in acrimony with ministers accusing Mr Varoufakis of wasting their time and failing to take the situation seriously.

Politicians from German chancellor Angela Merkel’s party have begun to argue publicly that a Greek euro exit might be the best solution both for Greece and its creditors. “Trying to pretend that economies as different as Germany and Greece can survive effectively under the same monetary umbrella has already been proven wrong and this is just going to be a long, long painful death for the Greek economy,” Richard Jeffrey, chief investment officer at Cazenove Capital Management in London, said on Monday.

With Ukraine to the north of Greece ravaged by Russian-backed separatists and Libya to the south collapsing as rival militias fight for control, the German government has made it clear that leaving the euro wouldn’t jeopardise Greece’s place in the European Union.

“Within the EU there are a lot of financial funds which will continue to be available for Greece,” Thomas Steffen, Germany’s chief negotiator with Greece within the euro area, said at an event in Berlin last week. “There is no reason to even contemplate, that Greece would leave the European Union.” - Bloomberg