Eight reasons why Greeks so emphatically voted No 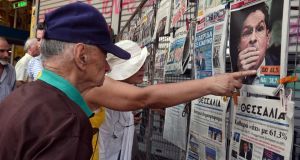 After a briefest of campaigns that lasted just eight days, Greeks voted by a huge margin to back their prime minister and government in Sunday’s hastily organised referendum. With opinion polls putting both sides neck and neck before the plebiscite, Greeks themselves were surprised at turnout (62.5 per cent) and the strength of the No vote (61.3 per cent). What were the eight factors that contributed most to this victory?

Whatever their many mistakes in the past few months in their talks with its creditors, most Greeks don’t hold Alexis Tsipras and his government as being responsible for Greece’s problems. While the imposition of capital controls and the closure of the banks came as a shock, previous governments are seen as being chiefly responsible for signing up to bailout deals what have had disastrous economic and social consequences. Voters see Tsipras as their only hope that things won’t get any worse. During the campaign, he pulled out all stops to sell the message to voters that a No result would leave him in a better negotiating position, despite the warnings of others who said this was an illusion.

During the week-long referendum campaign, the Yes side faced the obvious problem that the very institutions it was championing – the European Union and the eurozone – were seen by many voters as intent on heaping more austerity on the country. The popular perception was that the Yes side represented those who stood to lose the least under the creditors’ proposals, an impression that was reinforced by the well-heeled supporters who seemed to predominate at the final Yes rally on Friday. The Yes campaign lacked a clear leader and focus. The decision of former conservative prime minister Kostas Karamanlis to break six years of silence by calling on Greeks to vote Yes did it no favours either.

Tracked changes While the country’s lenders had spent months telling the Greek government that it was up to them to put “flexibility” in the Greek bailout programme by proposing alternative measures as long as they had the same fiscal effect, when Athens finally got around to submitting concrete proposals, they were almost all rejected. The Word document listing the measures was returned to Athens, replete with tracked changes. This prompted many in Greece, including critics of the government, to wonder whether this was an attempt by lenders to bring down the coalition government. As analyst Nick Malkoutzis commented, it seems Tsipras “was free to pick any measures he wanted, just as long as they were the lenders’ ones”.

VAT Most Greeks believe that their economy and society have been decimated by five years of austerity and that the country needs growth if it is ever to get back on its feet. In the recent negotiations, the creditors’ insistence that VAT for the hotel sector be increased from 6.5 per cent to 23 per cent and that the VAT discount on certain islands outraged the country’s tourism industry, a pillar of the economy, and was described as politically suicidal. Rather than improve Greece’s competitiveness, they feared it would only send tourists to neighbouring countries, where VAT rates are much lower.

IMF report On Thursday, just days before the referendum, the International Monetary Fund published an analysis that said Greece’s public finances would not be sustainable without substantial debt relief, possibly including write-offs by European partners of loans guaranteed by taxpayers. The report couldn’t have come at a better time for the Greek government, with prime minister Alexis Tsipras citing it in his final televised address to voters as a vindication of Greece’s position on debt relief. Later, it emerged that representatives of a number of euro zone countries tried to delay publication of the report, fearing it would prove crucial in tipping the balance in favour of a No vote.

Friday’s protest In the weeks before the sudden announcement of the referendum, Syntagma Square had become the stage for successive but opposing rallies for people to demonstrate their support or opposition to the government’s approach with the country’s creditors. Each Yes and No demo was followed by claim and counterclaim over which one was larger. While private TV media news bulletins afforded far more coverage to the Yes rallies in news, the sheer scale of the last No rally made it impossible to ignore. Featuring some of the country’s biggest entertainers, it was more a festival than a rally, and it conveyed the message that the No side was further ahead than the opinion polls suggested.

Media coverage Over the course of the short referendum campaign, the country’s media stations were accused of blatant bias in favour of the Yes campaign. Last Tuesday’s Yes rally got 47 minutes of coverage in evening news bulletins, compared with just eight minutes for the No rally. Only the newly re-established public broadcaster struck a balance in its coverage. Just like the private TV stations, the country’s newspapers were also openly in favour of a Yes vote. Moreover, despite a moratorium on political discussion on the day before the vote, one private channel Skai hosted studio discussions all day with a stream of figures identified with the Yes camp. The media’s stance backfired massively, with many No voters singling out this issue as one of the main reasons informing their decision. The power of No Despite its inherently negative meaning, OXI (“no”) for many Greeks has a very positive connotation symbolising national pride and defiance in a political and historical context. Indeed, no sooner are they taught to write the word in school, they learn about its historical significance as they march in formation behind Greek flags at the annual school parades on October 28th commemorating OXI Day, recalling Greece’s rejection of an Italian ultimatum that led to the two countries going to war. During the campaign, the government consistently invoked that historic No as the best response to the new “ultimatums” facing the country. “The Greek people, many times over the course of history, have proven that they know how to reject ultimatums … Our No will make history,” said Alexis Tsipras at the final No rally last Friday.