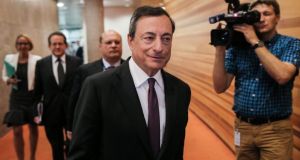 Ireland’s plan to repay its IMF loans early is facing resistance from the European Central Bank amid continuing concerns that last year’s promissory note deal was bordering on monetary financing.

In a setback to the Government’s bid to secure political agreement for the early repayment of the IMF portion of the bailout, ECB chief Mario Draghi indicated yesterday that concerns remained about the promissory note deal.

Asked about his views on Ireland’s bid to repay the IMF portion of its bailout loans following the ECB governing council meeting in Frankfurt yesterday, he said that the bank “took note” of the plan adding that the bank will monitor “very, very closely what is being done with the sale of assets so that we call monetary financing concerns are being properly and significantly addressed”.

Mr Draghi was referring to the Irish Central Bank’s obligation to offload the bonds it swapped for the Anglo Irish promissory notes as part in February last year. The deal is estimated to have saved the country up to €20 billion in borrowing costs.

“The point is, if Ireland is in a position to repay the IMF loans early, it should also be in a position to sell the bonds,” an ECB source said, adding that the central Bank had only sold a “fraction” of the bonds.

A crucial aspect of the promissory note deal agreed last year was the length of time the Central Bank would hold the long-term bonds that replaced the promissory notes. While the Central Bank committed to selling off those bonds at regular intervals, including a minimum sale of €500 million this year, it is facing pressure from the ECB to dispose of the bonds at a faster pace.

In its annual report earlier this year, the European Central Bank said the promissory note deal raised “serious monetary financing concerns” which “could be somewhat mitigated,” by the central bank’s disposal strategy.

It declined to disclose how many of the bonds had been sold this year.

The issue is likely to dominate talks between Minister for Finance Michael Noonan and Mr Draghi next Tuesday in Frankfurt.

The Government is seeking to repay its IMF loan early, but must secure the support of its European lenders as the original bailout agreement stipulates that any early repayment must apply to all creditors.

EU sources in Brussels said the European Commission is broadly in favour of the move, noting that anything that reduces Ireland’s debt burden – still one of the highest in Europe – is positive.

In a response to a question from MEP Brian Hayes at a European Parliament committee hearing in Brussels yesterday euro group chief Jeroen Dijsselbloem confirmed that the issue will be discussed by euro zone finance ministers at the informal eurogroup meeting in Milan next Friday. A number of member states may need parliamentary approval for any move to agree to an early repayment of the IMF loans, which could be politically difficult in some member states.

Minister Noonan travels to a number of European capitals on Monday for two-days of talks with senior euro zone figures, including Mr Draghi, before next week’s eurogroup and ecofin meetings in Milan.