Drawing parallels between austerity in Greece and the Irish famine 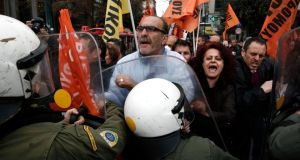 One of the more prominent critics of austerity is Oxford University Professor of economics, Simon Wren-Lewis. From a mildly left-wing, essentially Keynesian, perspective, Wren-Lewis has consistently argued that current European policies are not just mistaken in theory, they fly in the face of every known fact about how our economies function. He has repeatedly deployed standard, text-book economic analysis in support of his arguments. He has been left to conclude that if people still believe in stuff that is demonstrably wrong, their stance must be driven by ideology rather than intellectual thought processes.

In his most recent writings, the eminent professor has taken a slightly different tack. Citing recently published evidence, he notes that the health of the Greeks has shown an alarming deterioration and this is clearly associated with austerity inspired spending cutbacks. He asks why such apparent cruelty can be imposed by Europe’s policy making elites. He concludes, tentatively I think, that it is more a case of fundamentally erroneous beliefs than overt wickedness: policies are bad but the people driving them are not necessarily so.

He draws a fascinating series of parallels between Britain’s policies during the mid 19th century Irish famine, and those currently being imposed on the Greeks (and, presumably, other debt-laden economies). Then, as now, there was an official belief that there were fundamental economic inefficiencies and levels of corruption that needed purging. There were and are beliefs in market processes that cannot be interfered with. There were and are contracts that have to be enforced: the law must be upheld.

The guns that defended the grain shipments away from famine stricken areas of Ireland are akin to the enforcement of the rules that permit capital to flee stricken economies. Just as contract law meant that grain had to be exported, so bond holders have to be repaid. At gunpoint if necessary. Professor Wren-Lewis comes close - but doesn’t quite get there - to saying there is a thread that links Trevelyan and Trichet.

Is it all just a case of policies that flow from honestly held, but disastrously wrong, beliefs? A slightly different interpretation of events draws another parallel. Perhaps the British understood the absence of logic or humanity during the famine. And so did the Troika during the financial crisis. The suspicion is that they were very aware that what they were doing was at best idiotic, with awful human consequences. But they nonetheless carried on because it was too good an opportunity to miss. Crisis, be it famine or financial, should never be allowed to go to waste.

Wren-Lewis is the first to admit that his comparisons may not be proportionate. He is deliberately trying to provoke. Whether erroneous policies are simply based on muddled belief or dark cynicism is an important debate. Keynes famously argued that policy makers often based their beliefs on long dead mad men and scribblers. Modern politics is all about sticking to the view rather than coherence of thought. Mistakes are clung on to; an opinion changed in the face of awkward evidence is taken as a sign of weakness.

While Wren-Lewis represents an extreme point of view, there is one aspect of the comparison that arguably makes contemporary events much worse than those that took place during the famine. The initial driver of Irish starvation was a ‘natural’ (I use the term very carefully) event, potato blight, the cure for which was not readily apparent. Policy, of course, turned what happened next into a disaster. By contrast, we have known, since the 1930s, how to fix economies struck by unnatural disasters; we have simply chosen not to deploy that knowledge.

If there is anything to all of this the implications are both profound and deeply disturbing. At first, the consequences are purely economic - most obviously in levels of unemployment, particularly amongst the young. But as the effects spread, into areas such as health, the problem becomes political. If all of this persists, further social fragmentation will follow and political extremism will rise.

Just imagine if Professor Wren-Lewis’ thesis gains traction. What chance has Europe of holding together if relations become as poisonous between member states as they were between Britain and Ireland? And those relations, while better today, can hardly be described as normal. Politics will now take over from economics. It could turn nasty.