Downturn in economic activity starts to ease across the euro zone 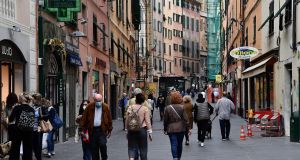 The Liguria region in Italy is among those that have given the green light to the possibility of reopening. Photograph: EPA

The downturn in activity across the euro zone has begun to ease as lockdowns introduced in some of its largest economies to help stem the spread of coronavirus are relaxed, although the bloc is still set for a historic economic contraction in the second quarter of this year.

A widely watched survey of services and manufacturing business activity showed an uptick in May, from record lows the previous month, according to data published on Thursday.

The IHS Markit euro zone flash purchasing managers’ index for services rose to 28.7 in May from 12 in April, which was the lowest since records began in 1997. The reading exceeded the 25 forecast by economists polled by Reuters.

The score is based on respondents’ report on the change in activity at their companies compared with the previous month; a reading below 50 indicates that a majority of businesses reported a deterioration.

“The euro zone saw a further collapse of business activity in May but the survey data at least brought reassuring signs that the downturn likely bottomed out in April,” said Chris Williamson, chief business economist at IHS Markit. “Second-quarter GDP is still likely to fall at an unprecedented rate.”

Despite the improvement, the PMI continued to indicate a rate of contraction “in excess of anything seen prior to the Covid-19 outbreak”, the report said. Jobs continued to be cut at an unprecedented rate, it found.

In Germany, the IHS Markit flash purchasing managers’ index for services rose to 31.4 in May from 16.2 in April, which was the lowest since records began in 1997. The reading is higher than the 26.6 expected by economists polled by Reuters.

Germany’s manufacturing PMI rose marginally to 36.8 in May, from 34.5 in April. The composite PMI, an average of the two sectors, improved to 31.4 in May from 17.4 in April. Companies reported a lack of new business and a sharp decline in work backlogs, which led to a third monthly decrease in employment.

The French IHS Markit purchasing managers’ index for services rose to 29.4 in May from 10.2 in April, the lowest since records began in 1998. Economists polled by Reuters had expected an improvement to 27.8.

May’s flash PMI points to a faster recovery for Germany, reflecting a quicker lockdown exit and a lower resilience in hard-hit industries, such as tourism.

“This, effectively, is evidence that the German economy is doing better than its peers,” said Claus Vistesen, chief euro zone economist at Pantheon Macroeconomics.

Germany’s economy has been hit less dramatically than other European countries – GDP fell by 2.2 per cent in the first quarter from the preceding three months, compared with 5.8 per cent for France.

Flash estimates are published one week before the final results and are based on about 85 per cent of the typical responses. – Copyright The Financial Times Limited 2020