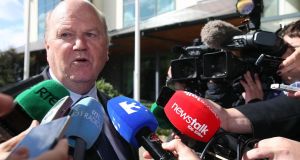 Finance Minister Michael Noonan speaking to the media at the Fine Gael party think-in during the week in Killenard, Co Laois.

It would be “prudent” to make the full austerity budget adjustments due in 2014 and 2015, tax consultancy group Deloitte has suggested. Publishing its pre-budget report, it noted the €3.1 billion adjustment expected in next month’s budget, to be followed by a further €600 million to be raised in 2015.

“One might observe that when considering the cumulative adjustment required over the next two years, the prudent approach would be to make the full adjustment in 2014,” head of tax and legal services Pádraig Cronin said in the report.

Deloitte said room for manoeuvre was “slim” considering the 12.5 per cent rate of corporate tax was “sacrosanct”, the recent rise in the top rate of VAT to 23 per cent, the property tax and an already high marginal tax rate on income.

‘Pensions space’
It said some reliefs and capital tax rates may be the focus of the budget. “Similarly, previously flagged changes in the pensions space have still not yet materialised, and therefore must be front of mind.”

Increases in capital gains tax (CGT) and capital acquisitions tax (CAT) to 35-36 per cent were likely to be among the “prime targets” for Minister for Finance Michael Noonan. Mr Cronin said: “The rate of increase in both CGT and CAT from 20 per cent to 33 per cent since 2009 is a cumulative increase in each tax of 65 per cent.

“If past performance is a guide to future performance, the likelihood is that both taxes would be increased by 2 per cent or 3 per cent to a rate of 35-36 per cent in Budget 2014.”

Mr Cronin said it would be preferable if the CGT rate remained lower and a “progressive approach was introduced to make room for a lower rate of CGT on entrepreneurial gains”.

An extension of the pension levy was another possibility in the budget.

Separately, the Nevin Economic Research Institute (NERI), a research body funded by a number of unions affiliated to the ICTU, also published a pre-budget submission yesterday.

It said there were “mixed signals pointing towards stability, even tentative recovery, alongside concerns on export growth, domestic demand, continuing long-term unemployment and declining GDP”.

It said the Budget 2014 adjustment should be €2 billion rather than €3.1 billion, with the saving on the promissory note restructuring used to reduce the scale.

The remaining adjustment should be reorientated towards tax measures, with “the only expenditure cuts being those already agreed and announced under the two public sector wage agreements”.

Publishing its pre-budget submission, the Irish Organisation for the Unemployed called on the Government to protect social welfare rates.