Ruling by European Union is later than expected 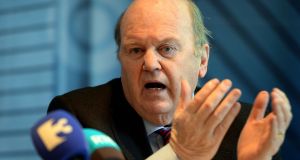 Minister for Finance Michael Noonan said the European Union’s decision on Apple’s Irish tax affairs will come later than expected, with a ruling now due in September or October.

A decision on the investigation, which began three years ago, had been expected by the end of this month.

Speaking this morning, Mr Noonan said there was no indication which way the EU will rule on the case.

The minister met EU competition chief Margrethe Vestager earlier this week in Brussels, just 24 hours before US treasury secretary Jack Lew was due to fly to Brussels for talks. It was the first bilateral face-to-face meeting between Mr Noonan and the former Danish finance minister since she inherited the Apple case on becoming competition commissioner 18 months ago.

At the meeting, Mr Noonan is understood to have underlined the government’s position that the case against Apple, based on EU state aid law, is unfounded, as well as the government’s intention to fight the case at the European Court of Justice in the event of an adverse ruling.

The EU’s anti-trust arm sought extra information from Irish tax authorities in March, delaying the outcome of the state-aid investigation.

That intervention followed the submission of additional information by the Revenue Commissioners to the commission in late January.

Mr Lew is expected to underline US opposition to Apple being obliged to pay any back taxes, which is emerging as the key point of tension between the two sides.