Countries can ‘comfortably live’ with more debt than thought in past, Regling says 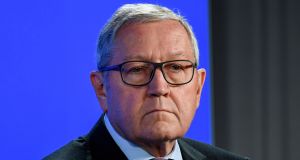 Klaus Regling: “We are probably in an era where interest rates are permanently lower than they used to be.” Photograph: EPA

Countries can “comfortably live with” higher debt burdens than thought almost 30 years ago when European Union budget deficit and borrowing limits were enshrined in the Maastricht Treaty, head of the European Stability Mechanism bailout fund, Klaus Regling, told an Irish audience on Wednesday.

“We are probably in an era where interest rates are permanently lower than they used to be – maybe not as low as they are today, but lower than 10 or 20 years ago,” Mr Regling said in a question and answers session that followed an address to the Institute of International and European Affairs in Dublin via video link. “The capacity of governments to service certain debt loads allows higher levels of debt today than 20 or 30 years ago when the Maastricht Treaty was negotiated.”

The treaty, signed by EU member states in 1992, established the Stability and Growth Pact that limits annual government deficits to 3 per cent of gross domestic product (GDP) and public debt levels to 60 per cent. Debt ratios above this level must be brought down over 20 years.

The 3 per cent deficit cap was suspended as the Covid-19 crisis struck last March and the European Commission is seeking over restart talks on reforming the wider fiscal rule book in the coming months. A spike in borrowing by euro zone governments in the past year has driven the average debt-to-GDP ratio up to 100 per cent.

The Irish ratio fell sharply from a peak of 123 per cent during the financial crisis to 57.4 per cent in 2019. The Department of Finance forecasts it will reach nearly 67 per cent this year. However, the underlying debt ratio – relative to the domestic economy – will grow from 95.6 per cent to nearly 115 per cent over the two-year period.

“The Stability and Growth Pact needs to be reformed,” said Mr Regling. “That’s an opportunity to look at debt levels and how quickly more normal debt levels should be reached.”

Mr Regling said that making countries reduce debt ratios to 60 per cent within 20 years “would mean too rapid a fiscal consolidation that would not be very good and also unnecessary, given the low interest rates”.

Still, he said that it will be “politically very difficult” to find consensus on acceptable future debt levels. “But we need to do that over the next 18 months or so,” he said.

Mr Regling also used the address to reiterate a call for the completion of a banking union, where the issue of a euro area-wide deposits guarantee scheme remains a controversial topic, and progress towards a capital markets union.