Unemployment jumps to 25% on back of renewed lockdown

Latest figures indicate that as many as 607,000 are out of work 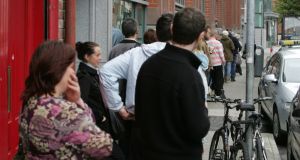 The latest figures point to a youth unemployment rate of more than 56%. Photograph: Frank Miller

The State’s Covid-adjusted unemployment rate jumped to 25 per cent last month as a full lockdown was reimposed.

The figures from the Central Statistics Office (CSO), which include those in receipt of the Pandemic Unemployment Payment (PUP), indicate that as many as 607,000 may have been out of work in January.

This was up from 20 per cent in December but still three percentage points lower than the record 28 per cent recorded in April last year at the height of the first lockdown.

The increase reflects the impact of Level 5 restrictions, introduced after Christmas, which forced all non-essential retailers to close. In the face of record infection rates, the lockdown was extended to other sectors such as construction in early January.

“Today’s startling figures show the return to national lockdown has applied the brakes to the economy once more,” Jack Kennedy of recruitment website Indeed said.

“With the country facing several more months under tight restrictions, the rapid roll-out of the vaccination programme is now vital, both for public health and for the health of the economy,” he said.