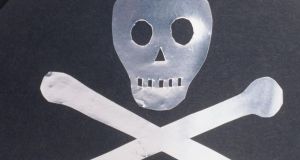 A European Union Intellectual Property Office report calculates losses here of €223 million in the pharmaceutical sector, €131 million in cosmetics and personal care, €40 million in wine and spirits, and €12 million in toys and games. Photograph: Dorling Kindersley/Getty

Irish businesses lose more than €400 million annually to counterfeit sales, according to a new EU report, which estimates that EU governments are losing €15 billion in lost taxes due to fake goods.

The report, by the European Union Intellectual Property Office (EUIPO), calculates losses here of €223 million in the pharmaceutical sector, €131 million in cosmetics and personal care, €40 million in wine and spirits, and €12 million in toys and games.

The 2020 Status Report on IPR [intellectual property rights] Infringement estimates the sales losses in these four sectors throughout the EU at €19 billion while an additional €15 billion in government revenue is lost due to the presence of counterfeit goods across a wider range of sectors in the marketplace through reduced direct and indirect taxes as well as the loss of social contributions not paid by counterfeiters. The report does not break down the loss to individual country exchequers.

Lost sales in the cosmetics and personal care sector have increased by €2.5 billion in the EU since a comparable study by the EUIPO in 2019 with an estimated 14.1 per cent loss to the sector’s sales due to counterfeiting. In Ireland, the figure is 18.5 per cent.

As well as revenue loss, the report notes the health and safety risks associated with dangerous counterfeit goods, such as toys and children’s clothes, pharmaceuticals, and electrical goods.

Research carried out by the office and Interpol also reveals links between counterfeiting and other serious crimes. Counterfeiting is viewed by criminal gangs as a relatively low-risk activity used to support other types of organised crime including money-laundering, document fraud, cybercrime, financial fraud, drug production and trafficking.

Since 2016, enforcers across the EU have carried out 29 major anti-counterfeiting operations targeting organised crime groups which were also involved in other serious crimes.

According to the EUIPO, the counterfeit trade is facilitated by the growth in small package shipments by parcel post or letter packets which are more difficult for customs officers to trace. Between 2014 and 2016, 96 per cent of all customs seizures of counterfeit pharmaceuticals were of postal or express courier deliveries.

The business models adopted by counterfeiters also make significant use of the internet to distribute their products and promote the distribution of and consumption of illegal digital content.

On the demand side, incentives to purchase counterfeit goods and services include lower prices, easy access and low degrees of social stigma associated with such purchases.

Commenting on the latest report, Christian Archambeau, executive director of the EUIPO, said: “Counterfeiting is not a victimless crime. Fake products take sales away from legitimate businesses and deprive governments of much-needed revenue. They carry clear health and safety risks for those who use them.”

A wider report by the office last year, which covered 11 trade sectors in total, estimated losses due to counterfeiting at €909 million in Ireland. In the EU as a whole, the value of counterfeiting was estimated at €60 billion.