Coronavirus: Fed under pressure to take more action to help US economy 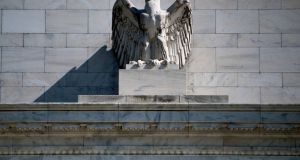 ‘Additional fiscal aid would likely be important for supporting vulnerable families, and thus the economy more broadly, in the period ahead,’ the Fed minutes said. Photograph: Brendan Smialowski/AFP

US Federal Reserve officials have moved closer to a consensus on how to take further action to help the economy weather the protracted coronavirus crisis, amid growing worries within the central bank about risks to the outlook.

According to minutes from the Fed’s monetary policymaking committee meeting in late July, officials stressed that uncertainty over the path of the economy was “very elevated” due to the impact of new waves of virus outbreaks and the waning fiscal support for households and businesses.

Against that backdrop, “several” officials at the central bank suggested that “additional accommodation would be required to promote economic recovery and return inflation to the committee’s 2 per cent objective”, and some stressed that “strong fiscal policy support would be necessary to encourage expeditious improvements in labour market conditions”.

The Fed has been debating whether to take further steps on top of a number of emergency measures it adopted early in the crisis, which included slashing interest rates to zero, sharply expanding its balance sheet through open-ended government debt purchases and establishing a series of emergency lending facilities to prop up markets.

The main option under discussion would be to strengthen the Fed’s guidance on interest rates to clarify that it will not raise rates until certain macroeconomic milestones are met. However, there was no clear indication that such a move could happen at the Federal Open Market Committee’s next meeting in September.

Additional fiscal aid would likely be important for supporting vulnerable families, and thus the economy more broadly, in the period ahead.

“A number of participants noted that providing greater clarity regarding the likely path of the target range for the federal funds rate would be appropriate at some point,” the minutes indicated. Some officials expressed support for an approach based on inflation and unemployment, while others said that those in combination with calendar-based guidance may be effective.

The minutes suggested that support was waning for a policy that would allow the Fed to cap certain treasury yields in order to keep financial conditions loose. So-called yield curve control has been at top of mind for investors and policymakers alike as a way for the central bank to support the economic recovery.

But, according to the minutes, Fed officials discussed at length whether such a policy was necessary at a time when treasury yields are already close to all-time lows, as well as its potential costs.

“Many participants judged that yield caps and targets were not warranted in the current environment but should remain an option that the committee could reassess in the future if circumstances changed markedly,” the minutes noted.

Meanwhile, the Fed suggested officials were close to finalising their longer-term review on monetary policy tools in a low-interest rate environment, which could help frame their next steps.

“Participants agreed that, in light of fundamental changes in the economy over the past decade – including generally lower levels of interest rates and persistent disinflationary pressures in the United States and abroad – and given what has been learned during the monetary policy framework review, refining the statement could be helpful in increasing the transparency and accountability of monetary policy,” the minutes said.

Markets have rebounded since the depths of the coronavirus-induced financial panic that erupted in March. This week, the S&P 500 touched a record high, having gained more than 50 per cent over the past five months. Even the riskiest corners of corporate credit markets have rebounded, buoyed by the Fed’s broad-based interventions.

Following the release of the minutes, long-dated treasuries sold off slightly, sending yields higher. The yield of 30-year treasuries rose 0.03 percentage points to 1.4 per cent, while benchmark 10-year yields ticked more than 0.01 percentage points higher to 0.68 per cent. The yield moves inversely to prices. US equities were flat after the release of the Fed minutes, with the S&P 500 lower by 0.01 per cent in afternoon trading.

Investors have been wary of the recent run-up in risky assets, considering the devastating economic damage inflicted by the coronavirus outbreak. A recent survey from Bank of America showed that an increasing proportion of fund managers are worried about current valuations.

Meanwhile, with nearly 13 million fewer Americans employed now than in February, Fed policymakers have faced growing pressure to ensure that its actions do not exacerbate economic inequality by boosting financial markets more than households and small businesses.

Fed officials highlighted the “very important” role that the relief packages passed by Congress since March have played in “granting some financial relief to millions of families”. They also flagged the expiry of critical additional benefits at the end of last month.

“Additional fiscal aid would likely be important for supporting vulnerable families, and thus the economy more broadly, in the period ahead,” the minutes said.