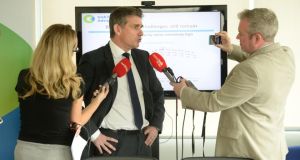 Professor John McHale, Chairman of , Irish Fiscal Advisory Council: stressed that significant uncertainties remain for the economy, primarily because of the high levels of private debt and the uneven pace of recovery abroad. Photograph: Dara Mac Dónaill / The Irish Times

The Government would be “unwise” to contemplate a budget adjustment of less than €2 billion given the uncertainties still surrounding Ireland’s economic recovery, the Irish Fiscal Advisory Council (IFAC) has warned.

In its latest financial assessment report, the State’s budgetary watchdog also warned the Government had no scope for tax cuts .

The council’s warning runs counter to Minister for Finance Michael Noonan’s suggestion that next year’s deficit target of 3 per cent could be achieved with a smaller adjustment and separate hints that tax cuts may be in the offing.IFAC chairman Professor John McHale said it was the council’s assessment that the Government must follow through on its original budgetary commitments to keep the Government debt metric on a downward trajectory.

Echoing a recent warning from the European Commission, Prof McHale stressed that significant uncertainties remain for the economy, primarily because of the high levels of private debt and the uneven pace of recovery abroad.

If the Coalition opted to row back on the proposed level of adjustment, Prof McHale said it ran the high risk of missing its deficit target for next year, which would undermine the State’s hard-won credibility.

On the prospect of tax breaks he said: “It seems to us unwise to erode the revenue-generating capacity of the State at this point.”

In its report, IFAC said significant progress had been achieved by the Government in resolving the fiscal crisis. It noted that if the proposed €2 billion adjustment for Budget 2015 goes ahead, a total of €32 billion will have been taken out of the economy since 2008, making Ireland’s austerity project one of the biggest in global financial history.

The council did, however, express reservations on the three-year time frame proposed to cut the fiscal deficit to zero after 2015, suggesting it was unnecessarily short.

In a separate blow to hopes of tax cuts, the prospect of some relief on the €41 billion in debt associated with bailing out the banks receded yesterday after a senior euro zone official said that the principle of retroactivity is not included in the guidelines for how the euro zone’s direct recapitalisation instrument will work.

“There’s nothing retroactive in the guidelines that we have adopted,” the senior official said ahead of a meeting of euro zone finance ministers on Thursday. “The rules as we have adopted them are forward-looking, so I see no case for retroactive application.”

Ireland is hoping that the European Stability Mechanism (ESM), the euro zone’s main bank rescue fund, could be used to retroactively recapitalise the State’s two pillar banks AIB and Bank of Ireland. Last June, at the end of the Irish presidency of the council of the European Union, euro zone finance minister agreed on the main guidelines on how the ESM’s direct bank recapitalisation instrument would work, including the provision that the potential retroactive application of the instrument should be decided on a case-by-case basis and by mutual agreement.

An Irish spokeswoman said yesterday that “nothing has changed” regarding direct bank recapitalisation which will be decided on a case by case basis. “The Minister for Finance and his Government colleagues ensure that Ireland’s case for retrospective direct recapitalisation is made at all levels as appropriate and remain confident that the commitment made by the euro area Heads of State or Government in June 2012 to break the vicious circle between banks and sovereigns will be respected.”