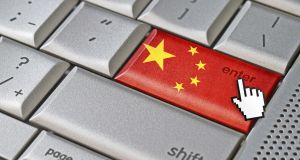 China has the world’s biggest population of internet users

As a follow-on to last week’s story about China calling for tighter control of the internet, the Communist Party has taken things a step further, after the country’s internet regulator vowed to make party views the “strongest voice in cyberspace”.

China has by far the world’s biggest population of internet users – 668 million people. It also has the most tightly controlled internet, with the Great Firewall of China suppressing content seen as a threat to the party.

The Cyberspace Administration of China recently said it backed continued exploration and improvements to the governance of cyberspace “with Chinese socialist characteristics”.

The report on the official Xinhua news agency ran: “It was agreed that the CPC’s [Communist Party of China] theories and achievements would be the mainstream opinions and main tone of China’s cyberspace, and the internet would be utilised to garner public support on the 13th five-year plan (2016-2020).”

Internet regulators were told to “improve the propaganda of the new thoughts and concepts” of the governance of the Communist Party central leadership, with Xi Jinping as general secretary of the CPC central committee, according to Xinhua.

After a recent conference on the internet, curiously held in China, President Xi said “no country should pursue cyber-hegemony” and he stoutly defended China’s right to independently choose its own model of cyberspace governance.

Dior to open boutique in Brown Thomas later this year 14:59
Davy chief executive and deputy chairman resign in fallout from €4.1m Central Bank fine 13:57
Liam Carroll’s legacy in property market will be debated for years to come 6 Mar
Officials may release beef carcasses from a herd whose location was unknown 6 Mar
Women on Air calls for ‘hard data’ and broadcasting quotas 6 Mar