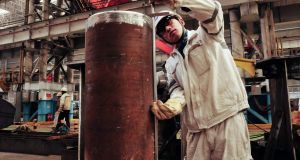 Chinese manufacturing activity expanded in March for the first time in nine months, official data showed on April 1, while a private survey indicated the smallest decline for more than a year in positive signals for the world’s second-largest economy. (Photograph: ASTR / China OUTSTR/AFP/Getty Images)

China’s manufacturing activity in March rebounded to its highest level since August, which has been seen as a sign that the government’s fiscal and monetary stimulus is kicking in, as well as the impact of reforms.

China’s manufacturing purchasing managers’ index (PMI) rose to 50.2 in March, up from February’s 49, according to the National Bureau of Statistics (NBS) and the China Federation of Logistics and Purchasing. The reading beat a median estimate of 49.4 in a Bloomberg survey.

The non-manufacturing PMI rose to 53.8 from 52.7 in February, while

commodity currencies and copper rose. A reading above 50 indicates expansion, while a reading below 50 reflects contraction. It was the highest reading in nine months and the first expansion since June 2015.

“Manufacturing production and the market warmed up as companies started working after the Spring Festival and supply-side reform accelerated,” Zhao said.

China`s economy, the world’s second largest, grew 6.9 per cent last year, its slowest rate in a quarter of a century. The news came on the day after Standard & Poor’s, the ratings agency, cut its outlook on China’s government credit to ‘negative’ from ‘stable’ as it believed rebalancing of the Chinese economy would take place more slowly than expected.

A similar PMI by Caixin and Markit, which focuses on smaller firms, showed manufacturing activity shrank again in March, though at the slowest pace in 13 months.