State banks lent a combined Rmb1.3tr to staunch a freefall in the stock market 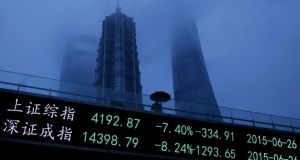 A man walks past an electronic board showing the benchmark Shanghai and Shenzhen stock indices, on a pedestrian overpass inin Shanghai, China. Photograph: Aly Song/Reuters

€19 2bn) to the country’s margin finance agency in recent weeks to staunch a freefall in the stock market, casting doubt on whether the recent equities rebound is sustainable without government support.

China Securities Finance Corp was established in 2011 to lend to securities brokerages to support their margin lending to stock investors. Amid the tumble in equities beginning in late June, however, the government has deployed CSF as a conduit for injecting rescue funds into the stock market.

CSF has lent to brokerages to finance their investment in shares and has also purchased mutual funds directly. But the latest revelations indicate that state support for the stock market is much larger than previously disclosed.

The Shanghai Composite index has recovered about 15 per cent since its low point on July 10th, but the magnitude of state support suggests the rally is largely a government-driven phenomenon.

The People’s Bank of China had previously said it was “actively assisting” CSF to obtain liquidity through interbank lending, bond issuance and other methods. The central bank later said it had provided loans directly to CSF, without specifying an amount.

Combined with the loans, that brings CSF’s total war chest to more than Rmb2 trillion even without including direct loans from the central bank.

The Caijing report suggests that the PBoC is seeking to minimise its direct role in lending to CSF, preferring to rely on commercial banks to provide funds for the stock market rescue.

“I think what the PBoC wants to achieve is like ‘do whatever it takes’, as said by [European Central Bank president Mario] Draghi to boost confidence [in the euro], but no need to really print money to buy stocks. They want to do easing, but not this way,” said Larry Hu, China economist at Macquarie Securities.