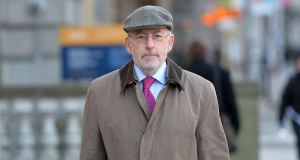 The rate of economic growth is being exaggerated and may be leading to overconfidence in planning for the future, the outgoing Central Bank governor Patrick Honohan has warned the Government.

The business activities of multinational companies were affecting the figures, he said, creating a risk that Government policy would not be based on a realistic view of future prospects.

In a letter sent to Minister for Finance Michael Noonan before the budget, Prof Honohan said the economy was still some way off its pre-crisis peak. This was a reason for caution in framing budgetary policy, he said.

He warned Mr Noonan it was imperative to avoid a return to the type of pro-cyclical fiscal policies observed in the past, and in particular not to base spending plans on windfall tax gains that could quickly disappear.

Separately, UCC economist Seamus Coffey has warned the Government against making long-term budgetary commitments on the back of temporary non-cyclical tax revenues.

Speaking at a conference in Dublin, Mr Coffey said several headline expenditure increases in the budget were predicated on a recent surge in corporation tax receipts, which remains unexplained and might well be temporary.

In his pre-budget letter to Mr Noonan, released under a Freedom of Information request, Prof Honohan repeated warnings from outside agencies such as the EU Commission and the IMF that the budget must be cautious and should aim to eliminate borrowing as quickly as possible.

The EU Commission is now examining Ireland’s budget and is expected to give a preliminary opinion by December on whether it is within fiscal rules.

Meanwhile, the Irish Fiscal Advisory Council head John McHale has expressed concern about the budgetary stance. The council will issue its formal view on the budget shortly.

Prof Honohan, in a strong warning to the Government, said the interpretation of Ireland’s economic growth numbers were “seriously complicated” by the way in which the activities of multinationals were measured, noting that a significant part of the recent growth in production could be attributed to “distorting features”.

“Neglecting these measurement issues has led some commentators to think that the economy is back to pre-crisis performance,” the governor said. Prof Honohan warned that total employment was still more than 10 per cent below the previous peak with the result that the unemployment rate has only just fallen below 10 per cent despite emigration.

“All things considered, you will be alert to the danger of using windfall fiscal gains to justify long-lasting spending commitments,” he said in the letter dated August 16th.

“Distinguishing between revenue sources that can be considered as stable – such as taxes on personal income – and those which have a one-off or transitory characteristic is a challenge of which I am sure that your department is cognisant, especially given the speed at which transitory revenue sources associated with the housing bubble evaporated in 2009 and 2010,” Prof Honohan wrote.

At a seminar on the impact of austerity hosted by the Royal Irish Academy in Dublin, Mr Coffey also warned of the dangers of basing budgetary measures on temporary tax dividends.

The Government’s levy on company profits is expected to generate about €6 billion in 2015, a 50 per cent increase on last year. A jump of this magnitude in any tax stream is “very strange”, Mr Coffey said.

1 Michael Smurfit: ‘I asked Trump to invite me to the White House for my 80th birthday’
2 Small businesses are cannon fodder in zealous anti-virus experiment
3 Ryanair expects air fares to fall when flights take off again
4 ‘I’m so lucky to be in the Caribbean – a million miles from Derry Girls’
5 Minister calls for EU to act against tobacco firms ‘undermining’ menthol ban
6 Lioncor gets planning permission for ‘house of Europe’ project
7 Consumers hesitant about travel as Covid-19 restrictions ease
8 Irish business of Carluccio’s restaurants to be wound up
9 Tax and the Pandemic Unemployment Payment: Your questions answered
10 Household savings soar as consumers stop spending
Real news has value SUBSCRIBE