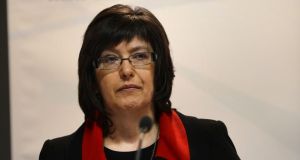 Just as Revenue looked to have weathered the storm over the local property tax, it has thrown the issue wide open again.

As of yesterday morning, even Labour had reconciled itself to the fact it was getting no support from its Coalition partners, or from the Revenue. Despite people’s trenchant views on the unfairness of being asked to pay their 2014 property tax before the calendar had even turned the page, it appeared there would be no climbdown.

The contentious forms of payment – credit and debit card – were just two of seven payment options, even if a bewildering number of people had actually opted for these lump-sum advance payments back in May for the first tranche of the tax. And the tax authorities were able to point clearly to the wording of the legislation as requiring them to receive returns indicating payment method by today (November 7th).

Yesterday, it decided people would instead have until November 14th to file their paper returns. It doesn’t sound like much. And it is easy to see why Revenue took the action – with the deadline looming today, the furore over the tax means a large number of people have been holding fire on making their returns.

But it does matter. Because, if Revenue can change one deadline enshrined in legislation, what’s to stop it changing another – the contentious issue that it must have payment by January 1st, or earlier if paying by credit or debit card.

When that point was put to Revenue yesterday, the best it could say was “the administration of a tax that is due in 2014 cannot necessarily only start in 2014” before saying that “certain concessions” can be made by it under its “care and management” function of tax legislation and “having regard to the effective administration of the tax”.

If that sounds like the sort of language that got Revenue into this pickle in the first place, that’s because it is.

Revenue Commissioner Josephine Feehily faces the Oireachtas Joint Committee on Finance, Public Expenditure and Reform today. She’ll need to come up with some better lines than that.