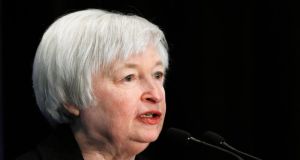 Janet Yellen is to succeed Ben Bernanke as chairman of the US Federal Reserve.

One person who will be pleased with US president Obama finally deciding to appoint Janet Yellen as Ben Bernanke’s successor as chairman of the Federal Reserve is Denis O’Brien.

Speaking at the Clinton Global Initiative – the Clinton family foundation’s annual think-in in New York last month – O’Brien said that the quick appointment of the Fed chairman would get “one obstacle out of the way” to generate financial stability.

The biggest mistake Europe made was not following the US and “Tarping all our banks”, he said, referring to the carve-out of toxic assets from US banks. He lamented five years of instability in Europe, how it “muddled” through and the currency bloc’s “confused” monetary policies.

“We could have another jolt into the banking system,” he said. “Certainly Greece is heading for a third restructuring. There’s just no shock-absorber in the system, and I think the benefits in the US of the Tarp was there was a shock absorber.” European telecoms companies were depleted of capital and in “a fragile position” because shareholders want dividends and governments want further investment in broadband.

On Ireland’s recovery, he said it has had to take “some really heavy doses of cod liver oil” and endured a “very tough” three or four years with wages falling by 20 per cent. “We just, as a country, got ahead of ourselves, and now we’re kind of an emerging economy again,” he said.

Most surprisingly, O’Brien admitted that he had a “sneaking regard” for some of the things that the Occupy Wall Street movement was pushing. He called on companies to move away from “ticking of boxes” on a corporate social responsibility in annual reports to “doing something impactful”.

Those kinds of things would be the “antidote” to the Occupy movement, he said.