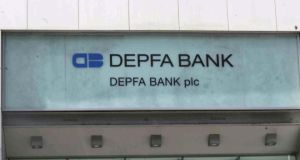 “Depfa’s problem balance sheet would have sunk Ireland in 2008 and the German’s regulator’s acceptance that Depfa was its problem is one of the few breaks that Ireland got at the time.” Photograph: Cyril Byrne

The Depfa saga rumbles on, with reports over the weekend that the most likely buyer for the zombified Dublin-based public-sector lender is a consortium led by hedge fund manager Third Point.

If it’s true, it will be Third Point’s second tilt at the bank, having made an offer in 2012 to Depfa’s parent, the nationalised Hypo Real Estate (HRE).

Several other hedge funds that specialise in distressed assets have also been linked to Depfa, including Lone Star, Apollo, TPG and Bain. The decision obviously rests with HRE but the Irish regulator will have to approve the deal as Depfa is an Irish bank.

Given the enthusiasm shown by the Irish regulator for washing its hands of Depfa five years ago, it would be rather churlish for them to throw a spanner in the works this time round.

Depfa’s problem balance sheet would have sunk Ireland in 2008 and the German’s regulator’s acceptance that Depfa was its problem is one of the few breaks that Ireland got at the time.

The subsequent investigations in Hypo may have confirmed that responsibility for the Depfa debacle did indeed ultimately rest in Germany, but that would have been cold comfort now had Frankfurt played hard ball in 2008.

The quid pro quo is presumably the waving through of the Depfa sale by the Irish authorities, but it many not be that simple.

Depfa is still a €70 billion monster and the Irish authorities will have to be comfortable that once the umbilical cord to the the German taxpayer is cut, the Irish taxpayer does not stand in line if things go wrong again.

One thing is for sure and that is that hedge funds are masters of the art of making sure their balance sheets don’t get contaminated in these situations and no doubt will employ elaborate off-balance sheet structures of the sort that caused such chaos to begin with.

Indicative bids were supposed to be in by yesterday. The story still has a long way to run.