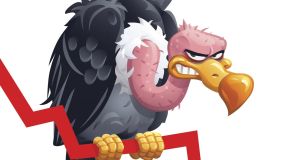 Opposition politicians have called on the Government to do more to ensure so-called vulture funds cannot continue to take advantage of legislation to avoid paying tax on profits made buying and selling Irish property assets.

Opposition politicians have called on the Government to do more to ensure so-called vulture funds cannot continue to take advantage of legislation to avoid paying tax on profits made buying and selling Irish property assets.

Speaking after Minister for Finance Michael Noonan on Tuesday announced a proposed amendment to section 110 aimed at closing off a controversial loophole, Independent TD Stephen Donnelly, who did much to raise the issue, welcomed the new rules, which come into immediate effect.

“Closing down this loophole will see many billions of additional taxes being paid to the Irish exchequer,” he said.

Mr Donnelly said however that the Government must go further until every option is exhausted to claim taxes back retrospectively.

“It is my hope that the review conducted by the Charity Regulator will lead to a more detailed investigation of the circumstances by which this loophole came to be so commonplace among these funds,” he said.

Labour Party leader Brendan Howlin also welcomed the proposed amendments, which will be finalised after Budget 2017 is announced next month. He too called for further steps to be taken against foreign investors who have used section 110 vehicles to avoid paying tax.

“Issues like the abuse of section 110 were not created by design but the abuse of that section, which some corporate law firms have openly advertised on their websites, should have been stopped before now. Whatever changes we apply to our tax code, there are many people employed to find new loopholes,” he said.

Jim McDonnell, tax partner at PwC Ireland said there had been a concern that any changes made to Section 110 could have a negative impact on the funds sector as a whole.

“The amendment has been focused on what all of the noise has been about rather than the broader sector so that will be seen as a positive,” he said.

“I think there’s been an acceptance that this was going to happen and while there may be complaints and lobbying I don’t think those affected expect that things will be shelved,” Mr McDonnell added.

Grant Thornton tax partner Peter Vale said that as the new rules had been flagged well in advance, they would not have come as too much of a surprise to international investors. However, he said the retrospective element to it might lead to a few raised eyebrows.

“I think it will largely be looked at as an isolated incident by investors even though it does impact on return on investment,” he said.

“Given that it is a very small part of the overall securitisation market the issue will likely be seen as a domestic issue, although I would expect to see some lobbying on the retrospective element,” Mr Vale added.

The Irish Tax Institute said the new rules would add to the complexity of Section 110.

“It is an early decision by the Minister that has brought clarity to the situation. It’s a very technical piece of legislation so the early publication in advance of the Finance Bill gives people an opportunity to look at the practical consequences of what is involved, both in terms of the specific area that is targeted and any wider impact that may arise,” said the institute’s policy director Cora O’Brien.

“The Minister has certainly stressed the importance of the overall financial services sector and has targeted the specific area only where issues have arisen,” she added.

The Irish Funds Industry Association said it would not comment on the new rules at this stage.

Deleting your Facebook account? Here’s a few things to check off your list first 06:15
Nokia G20: A mid-range Android phone with several high-end features 06:00
DCU rolls out e-scooter scheme on its campuses 05:30
Amazon union battle is only the beginning of a bigger conflict 05:30
Emporia Smart 4: Simple smartphone that’s not just for older people 05:29

2 DCU rolls out e-scooter scheme on its campuses