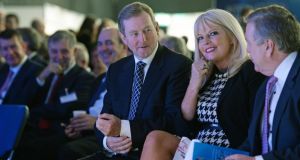 Taoiseach Enda Kenny and Minister for Jobs, Enterprise and Innovation Mary Mitchell O’Connor at the launch of International Markets Week at the RDS on Wednesday. Photograph: Eric Luke

The Government is planning a series of budget initiatives to help Irish companies raise finance, particularly in targeting new export markets in light of Brexit. The schemes will focus on circumstances where normal finance would not be available from banks.

Taoiseach Enda Kenny said on Wednesday that next week’s budget will include a number of measures to safeguard Irish companies from the impact of Britain’s decision to leave the European Union.

Speaking at the start of Enterprise Ireland’s International Markets Week event in Dublin, Mr Kenny indicated that the Government was committed to ensuring that all necessary steps would be taken to protect exporters.

The Government is likely to ramp up SME lending from the State-owned Strategic Banking Corporation of Ireland (SBCI) and to develop specific programmes to support export sales to new markets.

There is already a plan for the SBCI to manage a revamped and improved credit guarantee scheme. Sources say the Brexit impact will be a factor in how the revamped scheme is designed.

Similar so-called export credit finance schemes, which operate elsewhere in the EU, involve an element of government support for the provision of finance, either by extending loans from state bodies or providing credit insurance.

A key issue for banks lending cash to companies targeting new markets is the risk that they will not get paid, which means financing terms are often unaffordable without state support.

The Taoiseach referred in his speech to “risk sharing” with businesses, meaning the State would part-underwrite any losses emerging from these arrangements. He also referred to using new legislation, believed to refer to the establishment of the SBCI.

“On foot of legislation that was passed earlier this year, I expect the Government will shortly be in a position to roll out new products that will improve the attractiveness of existing offerings relating to risk-sharing,” Mr Kenny said.

According to the Department of Finance, the SBCI, which offers low-interest loans, has a current funding capacity of €1.05 billion, €836 million of which has been committed to the SBCI’s seven nonlending partners.

The provision of credit (based on sustainable business cases) will give SMEs time to diversify their exports and restructure their cost bases in order to continue trading with the UK during a period of weaker sterling, the department said.

The move comes as sterling hit new lows this week following confirmation from the British prime minister ,Theresa May, that she will formally trigger article 50 by the end of next March, thus beginning the UK’s exit from the EU.

Mr Kenny said the Government had recently established a dedicated Cabinet subcommittee to deal with Brexit, which he is chairing.

“Every Government Minister, every department and every agency is treating Brexit as its top priority,” he said.

Since the UK vote on June 23rd, the Taoisearch said the Government had been busy setting out Irish concerns, putting plans in place “and ensuring that our voice is heard at the highest political level in Europe”.