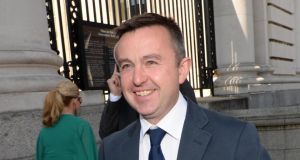 It was supposed to be a quiet affair. Today euro zone and EU finance ministers reconvene for the first time since June for an informal meeting in Vilnius, Lithuania.

But the news that the European Commission has launched a probe into the tax activities of some member states, including Ireland, has added a fresh element to proceedings. Minister for State Brian Hayes is likely to face some tough questions from colleagues at tomorrow’s discussion on tax evasion.

The timing of this week’s disclosures is somewhat unfortunate for Ireland. Just as the US senate hearing into Apple’s tax affairs unfolded a day before May’s summit of EU leaders, leaving Enda Kenny to face the music from reporters in Brussels, this week’s reports that Brussels is looking into Ireland’s tax affairs could throw up some awkward questions for Hayes in Vilnius.

Revelations
However, despite the latest revelations of Brussels’ early-stage inquiry into the tax affairs of Ireland, Luxembourg and the Netherlands, the question of how much power Brussels can actually wield over Ireland’s tax arrangements remains.

The sovereignty of
individual states’ taxation policies is enshrined in EU law, and controversy over Ireland’s 12.5 per cent corporate tax rate which surfaced during the bailout negotiations has receded somewhat from the political agenda in Brussels.

Other moves to consolidate an EU-wide approach to taxation have floundered.

Similarly, the concept of a Common Consolidated Corporate Tax Base, which would oblige multinationals operating in Europe to report taxes on a Europe-wide basis , has also faced delays.

What has changed in Europe, however, is public awareness of tax evasion and avoidance. Last year’s
Commons committee hearings into the corporate tax affairs of Starbucks propelled the issue into the public consciousness.

This resulted in a concerted effort by EU leaders and the European Commission to tackle the tax issue on two fronts – clamping down on individual tax avoidance and tackling the issue of multinational tax arrangements.

By choosing to embark on an early-stage state-aid inquiry, Brussels is exercising one of the few avenues open to it in terms of power over taxation.

Competition law is one area in which the EU continues to exert huge power. Brussels may not have the power over member states’ corporate taxation policies, but it could judge specific tax arrangements to be anti-competitive.

However, even if a formal state aid investigation is launched, its impact on Ireland’s corporate tax rate is likely to be minimal.

Tax devices
It is likely that Ireland would be prepared to abolish specific tax devices, such as the much-
maligned “double -Irish” , to assuage EU concerns, but that is unlikely to have a substantive impact on companies’
decisions to invest in Ireland.

Brussels is aware that, even if a company did withdraw from Ireland, it is more likely to bring its business to an Asian
or South American country than elsewhere in Europe.

As a result, Brussels is treading a difficult line in its battle against tax evasion as
it balances the impulse to respond to populist concerns about the ethics of corporate tax arrangements with the need to maintain investment into Europe.