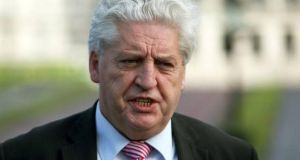 Uncertainty over Britain’s future membership of the EU is undermining the political stability necessary for prosperity, the annual British-Irish chamber of commerce conference has been told.

He said the UK is Ireland’s most important market, and the UK exported more to Ireland than it does to China, India and Brazil combined, a volume of trade worth over a €1 billion a week.

On that basis, “the case for remaining in the EU is plain,” Dr McDonnell told delegates at the conference in Dublin.

“Brexit would spell disaster for these islands, and nowhere more so than in Northern Ireland, ” he said.

Spelling out the possible consequences for Ireland, Dr McDonnell said while common travel would most likely remain, there would be renewed restrictions in the border regions for goods and services.

He also suggested that change to the freedom of movement of people to travel and work would have a devastating impact on the island’s common economy.

“From a relations point of view - within the EU, the Irish-British differences and antagonisms in Northern Ireland can be seen as petty in the overall community setting,” he said.

“While outside the EU, the stark divide would possibly loom again with Westminster once more being the principal political barometer rather than the wider EU.”

President of the British-Irish chamber and GSK Ireland general manager Aidan Lynch said any change to Britain’s EU membership would mean a big change for Britain and Ireland.

“It’s fair to say that politically and economically Ireland and the UK’s position in Europe, whilst distinct, are linked.”

He said the Irish Government had made it “very clear” that it believes Irish strategic interests are best served by Britain’s staying in.

In a separate address, Fine Gael MEP Brian Hayes said that those that predicted the end of the euro had got it “spectacularly wrong”.

“During the last five years the Cassandras got it wrong time and time again regarding the fate of the euro,” he said.

“ None of the wild predictions regarding euro exits, disintegration and collapse have come to pass. In fact the opposite has happened. The Eurozone system has been modified in order to make it more fit for purpose.”

Minister for Justice Frances Fitzgerald said the “shoulder to shoulder” theme of the conference aptly described the interdependent nature of the British-Irish business relationship.

She referred to the United Kingdom as Ireland’s best friend and ally within the European Union and said that the prospect of the EU without the UK is not one that Ireland would wish to contemplate.

1 Johnny Ronan loses out on €315m Dublin docklands deal
2 Bank of Ireland takes €169m charge for 1,700 job cuts
3 How long can Government afford to keep State pension age at 66?
4 Liquidators appointed to Irish arm of Wirecard
5 Ryanair and Aer Lingus to cut further flights from regional airports
6 Meath site primed for delivery of enterprise and employment
7 How much state pension will I get next year?
8 Am I crazy to consider switching to an Ulster Bank mortgage?
9 European shares in the red as investors react to new lockdowns
10 DAA warns of confusion on airport Covid tests
Real news has value SUBSCRIBE