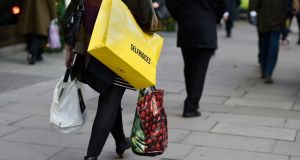 A shopper in London. “Business in this country is already feeling the pain of the economic upheaval of leaving the EU,” said Ben Page, chief executive of Ipsos Mori.

Business is already suffering from Brexit, according to some of Britain’s biggest companies, lending weight to a cross-party effort by MPs this week to avert the risk of the UK crashing out of the EU without a deal.

Despite a stream of positive economic data, an Ipsos Mori survey of senior executives from more than 100 of the largest 500 companies found 58 per cent felt last year’s vote was already having a negative effect on their business.

Just 11 per cent found the Brexit decision had meant a positive impact while nearly a third - 31 per cent - thought it had made no difference to their company.

“Business in this country is already feeling the pain of the economic upheaval of leaving the EU,” said Ben Page, chief executive of Ipsos Mori. “There is no sign that this is likely to ease this year.”

Company bosses have voiced concern about losing competitive advantage against European rivals if tariffs rise after Brexit, adding to the cost of producing and exporting goods.

Investors also appear to be waiting for greater clarity about the outcome of Brexit negotiations before committing funds to longer-term projects.

Theresa May will this week face a rebellion by pro-European Tory MPs who fear that she could walk away from the negotiating table in Brussels without a deal, with potentially serious effects for business.

The prime minister has said she would prefer “no deal to a bad deal”, raising the prospect of Britain leaving the EU to fall back on World Trade Organization rules, including tariffs.

Steve Baker, a Tory Eurosceptic MP, said up to 27 Tory MPs could this week back a “wrecking amendment” in the committee stage of the bill authorising Mrs May to invoke Article 50 and trigger Brexit.

The amendment would give parliament a say if Mrs May concluded that no deal was possible, in effect requiring her to go back to Brussels to seek better terms. She will order Tory MPs to oppose the measure.

For Labour, the agony over Brexit continues, with Jeremy Corbyn facing the prospect of losing two of his closest allies - Diane Abbott and Clive Lewis - if they defy him and vote against the Article 50 bill on its third reading on Wednesday.

Mr Corbyn said he had yet to decide whether to impose a three-line whip requiring Labour MPs to back Brexit, but hinted that he would show clemency to rebels in any event: “I am a very lenient person,” he told Radio 4’s The World this Weekend.

The Commons battles over Brexit have been played out against a benign economic backdrop, confounding those who predicted a downturn after a Leave vote.

The Office for National Statistics reported last month that the UK was the fastest growing economy in the G7 last year, and was not yet showing any signs of the slowdown that many economists predicted would follow the vote to leave the EU in June.

But the less rosy sentiment from business is supported by economic forecasters, with Sir Charlie Bean of the Office for Budget Responsibility and former deputy governor of the Bank of England saying last week that the strong consumer spending seen after the Brexit vote in June was likely to fall away in coming months.

Bank of England figures show that consumer borrowing growth in December slowed to its lowest in more than two years, while consumer confidence has also dipped.

Two-thirds of the 114 FTSE 500 business leaders surveyed believe the business environment will become more negative over the next 12 months, while only 13 per cent believed the opposite.

A large majority – 84 per cent – said that it was “vital” to their business that the government handled Brexit negotiations well. But half said they were not confident in the government’s ability to negotiate the “best deal possible” with the EU for UK companies.

An even larger majority – 96 per cent – was confident their business could adapt to the consequences of leaving the EU, and more than two-thirds had already taken action in response to the referendum result. A tenth were moving business outside the UK.

In terms of their priorities for the forthcoming negotiations, the business leaders said movement of labour and access to skilled labour came the highest, followed by securing free trade or retaining the single market with the EU and passporting rights.

In order to be successful in a post-Brexit UK, the interviewees said they wanted the level and complexity of regulation to be reduced and for it to still be easy to recruit EU staff.