Betting all on a horse called Growth 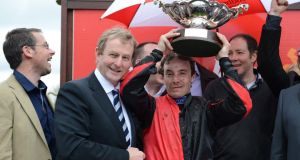 Outwardly, the State wears the sober clothes and stern expression of an austere Victorian accountant. It affects the pitiless but nobly determined gaze of a statue of Prudence on a granite pedestal. But inwardly, secretly, the State is a chancer.

When it shuts the office door, having turned away another importunate orphan pleading for undeserved assistance, it nips down to the bookie. It wagers everything on a horse called Growth. Growth has a dodgy track record and has let down the punters time and again. But the State is betting everything it has that Growth will come good in the end. Why? Because, if it doesn’t, the entire strategy of the last five years, all the pain for citizens and all the public money injected into failed banks, will have been for nothing – or less than nothing.

Last week, the International Monetary Fund published its ninth review of Ireland’s situation under the troika deal. The irony is that the bogeymen of the IMF have had to take on the job of making the case for radical debt relief for Ireland that the Government should be making. While our lot are wittering on about the Celtic comeback, the IMF is doing the State’s job of pointing out that, unless European policy changes, Ireland could be heading for a bigger crisis than the one it faced in 2010.

The IMF asks the awkward question – what if the State’s cheery projections for economic growth are wrong? This is no wild speculation. Official projections for growth have been consistently overoptimistic. For example, the Department of Finance told us with considerable confidence that real GDP would grow by 2.5 per cent last year. The actual figure was less than 1 per cent – the official projections were 2½ times higher than the real outcome.

Growth matters because public debt is measured as a proportion of GDP. In 2007, the general government debt was 25 per cent of GDP. By 2011, it was 106 per cent. This year it will hit about 123 per cent. There is a big lie repeatedly told that this debt problem is somehow separate from the bank bailout. It’s not: 60 per cent of the increase in net debt is directly attributable to the costs of bailing out the banks. Be that as it may, the official story is that the debt level will peak this year and then gradually fall to 117 per cent in 2015 – still appalling but moving in the right direction.

But this fall is entirely dependent on growth. The current official projections are for growth of about 3 per cent in 2014 and 2015.

If Taoiseach Enda Kenny is to be on the platform outside the GPO in 2016 celebrating an even vaguely credible return to Irish independence, these figures have to be right. If they’re overoptimistic to the same extent as last year’s figures, the troika will be back in charge and we will be headed for some kind of default.

This isn’t hysterical doom-mongering – it’s essentially what the IMF said last week. It points out that if growth is half a per cent instead of 3 per cent, the burden of debt will rise very quickly to catastrophic levels.

If the economy remains stagnant, debt automatically rises as a proportion of GDP because the cost of servicing loans is higher than the rate of economic growth.

In this scenario, the debt level doesn’t peak this year and then gradually declines. It keeps rising – to 134 per cent in 2018 and 150 per cent by 2021. To put these figures in perspective, the debt in 2010, when the troika came in, was 96 per cent of GDP. The mind-blowing prospect is that Ireland would be in twice as big a hole of excessive public debt (ie, over the 60 per cent permitted in the euro zone) as it was when the troika came in – the ultimate triumph for the policy of banksterity.

This is, of course, a pessimistic scenario. Maybe we’ll get lucky. Maybe the world economy will rebound and we’ll return to modest growth and we’ll be left with a merely appalling rather than utterly catastrophic level of public debt. But this is the point. Everything we’re suffering is predicated on “maybe”.

In this great gamble on sustainable growth, no one is telling us where it is to come from. There is an assumption that we can go back to the lovely growth rates of the years before the crash. Ashoka Mody, who led the initial IMF team in Ireland, has worked out a very interesting figure. Between 2001 and 2007, we had real GDP growth of nearly 5 per cent. But of that, all but 1 per cent came from two sectors – banking and building. Strip out these bubble effects and we’re actually looking at a pre-boom norm of 1 per cent annual growth – pretty much what we’ve got now.

What, exactly, makes us think that we can get sustainable growth of three times that level, with “staggering” (the IMF’s word) levels of mass unemployment and vast private debts? Rather than answer that question, we keep raising the stakes at the bookies.