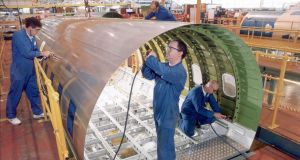 A new minister for the economy is about to be appointed in the North amid clear warnings about the challenges ahead, with 500 in Ballymena, Co Antrim, this week facing unemployment.

The beginning of the end for the Gallaher tobacco company, owned by the Japanese firm JTI but founded by a Derry teenager in 1857, could not have come at a worse time for the incoming minister.

The Ballymena factor is likely to cast an immediate shadow over the appointment. The new minister can expect to face calls to help both the people who have lost their jobs in Ballymena and local businesses.

The new department for the economy and its minister will need to get an effective strategy to deal with such events.

Gallagher’s alone injected some £60 million in wages into the local economy each year, and local retail and hospitality companies are preparing for the hit. Glyn Roberts, chief executive of the Northern Ireland Independent Retail Trade Association, said the closure of Gallagher’s would have a “huge impact” on the local community, and there needed to be a focus on finding solutions.

“One of the suggestions we have put forward is to create an enterprise zone in Ballymena – let’s utilise the skills that exist here, let’s use sites like Gallagher’s to attract new high-end manufacturing jobs. We need to replace what has been lost in Ballymena with something different,” Roberts says.

And it is not just Ballymena where growing unemployment is an issue – in the three months to March this year some 4,000 more joined the dole queue in the North. The latest figures show 55,000 out of work in the North, and Canadian aerospace group Bombardier plans to add to this with a potential 630 job losses scheduled in Belfast this year.

In its recent Northern Ireland Economic Outlook PwC forecasts that the local economy is likely to grow by just 1.3 per cent this year and possibly 1.5 per cent next year – compared to its pre-recession performance in 2004 and 2005 when economic growth ran at 3.1 per cent and 2.6 per cent.

Add to the rather flat economic forecasts the flurry of expectation that the reduction in corporation tax rates in the North to 12.5 per cent from April 2018 has created and it is easy to see why any minister is going to be under extreme pressure on the jobs front from day one – and not just in Ballymena.