Ideology brooks no argument, despite what the facts say 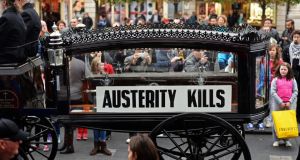 European policy makers “are doing everything they can to stop recovery taking off, so they should not be surprised if there is in fact no take-off. It is balanced-budget fundamentalism, and it has become religious”.

I think he was only partially correct, particularly if he meant that important decisions are based on a body of logical, coherent thinking, albeit one of a misguided kind. He went on to argue that “madmen in authority, who hear voices in the air, are distilling their frenzy from some academic scribbler of a few years back”.

He was right about the madness but, like many a contemporary economist, wrong to infer that actual policies always have their roots in ideas once thought of as sound. Keynes failed to recognise the full significance of the role played by ideology; he didn’t make enough of his own point about madness.

Simon Wren-Lewis, a professor at Oxford University, has tried manfully to resurrect this Keynesian way of thinking: in several articles he has tried to distill the logic behind European austerity. And then he proceeds to dismantle the intellectual edifice that he sees as underpinning current economic policies in the euro area (and the UK).

For the most part I think he fails – not because he fails to identify the logic driving austerity but more because his task is doomed from the start. There is no such theoretical rationale, the logic simply isn’t there, hidden or otherwise.

Professor Wren Lewis has himself come to a similar conclusion: he now likens current beliefs in budgetary austerity as akin to creationism and climate-change denial. The (accumulating) evidence emphatically points one way but contrary beliefs remain as rock solid as ever.

Despite much evidence to the contrary, economists do reach broad agreement on some things. The effects of fiscal austerity when interest rates are zero is one such notion, about which there is almost universal consensus: it’s a very bad idea.

Another eminent professor, Paul De Grauwe of the London School of Economics, made the same point when he recently said that European policy makers “are doing everything they can to stop recovery taking off, so they should not be surprised if there is in fact no take-off. It is balanced-budget fundamentalism, and it has become religious”.

Much has been made of the apparent very recent conversion to this way of thinking by Mario Draghi. His speech to the Jackson Hole gathering of central bankers has been variously interpreted as heralding an imminent bout of quantitative easing by the ECB and a validation of forthcoming tax cuts by Michael Noonan.

Draghi certainly nodded in the direction of those who argue that “structural reforms” (code for policies that include austerity) have short-term economic costs that need, sometimes, to be mitigated by both fiscal and monetary policies. This rhetoric is new, it is very different: Draghi is the first important European policymaker to speak in this way. But it is almost certainly dead wrong to infer that something dramatic is about to happen to either fiscal or monetary policies. That is not how Europe works.

Whether or not inertia is hard wired into European policy making, there is a simple practical question: if Draghi is giving the green light to less austerity, who does he have in mind? It is certainly not the Irish Finance Minister. The one country that could seriously do with less austerity with no implications for debt sustainability is Germany. The spelling and grammar checking software on this computer does its utmost to prevent me putting ‘Angela Merkel’ and ‘fiscal expansion’ into the same sentence.

The political consequences of European economic stagnation are easy to describe but difficult to time. The French government is in total disarray, precisely because of economics. There will be much more of this. And, as always, politics will drive the economics: more political chaos will, eventually, force the ECB to act in a meaningful way. That’s why bond markets are moving today. That same political chaos will produce pan-European fiscal initiatives. Balanced budget fundamentalism has one, not terribly democratic, core belief: Europe’s local politicians cannot be trusted with spending and taxation policies. So, like monetary policy, fiscal policy will be centralised in the hands of technocrats. Then we will get some extra spending, some proper relief from austerity. But not before.

The trouble with chaos, of course, is that it is chaotic. And very difficult to predict and manage.