Analysis: Obama move is another warning signal to Ireland 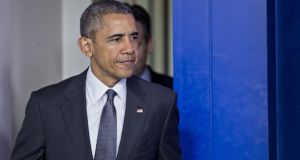 Having failed with two earlier measures to stop the inversion bandwagon, the Obama administration has finally scuppered the Pfizer/Allergan deal

When a massive $160 billion merger involving an Irish company is stopped in its tracks by emergency measures by the US government, you might expect there would be immediate implications for Ireland. However the importance for Ireland of the collapse of the Pfizer/Allergan merger is more in the signal it sends about the hardening international approach to multinational tax than in the specific implications from the collapse of the deal. It is also aimed at the investment bankers and lawyers who have been making huge profits from advising on such deals.

Pfizer was planning to merge with Allergan, in a deal which would have moved its headquarters to Ireland. The key to this is that it would have moved Pfizer out of the grip of the US tax system and given it greater scope to use a massive $128 billion in accrued profits it held outside the US. Big US multinationals have a range of complex structures based on the provisions of US tax law which allow them to avoid paying US tax on profits earned outside the States, once the money remains offshore. However there are restrictions in US tax law on how the money is deployed - by moving to become an “ Irish” company this would have removed Pfizer from the US tax system entirely and given it more scope to use the cash.

However while this would have seen more profit booked in Ireland, it would probably not have meant a big increase in corporation tax paid here by Pfizer. The company would continue to pay corporation profits tax in the markets in which it operates outside the US, but it would be unlikely to may much more here. ( Ireland’s corporation tax rate at 12.5 per cent is lower than most, so the provision that obliges companies to pay top up taxes in their home jurisdiction, where the rate at which they were taxes abroad is lower, would generally not have applied.)

Of course the establishment of a new HQ here would have led to some additional employment and activity, but given the toxic nature of these deals, Ireland has not been seeking them, and the IDA and the Government will be quietly relived than this one isn’t going ahead. A series of aggressive tax deals starting with the Actavis takeover of Irish company Warner Chilcott in 2013 had led to the domiciling of Allergan here, putting an unwelcome spotlight on Ireland. Ironically, Ireland’s gain from these deals is limited, but international reports would make you think otherwise.

It remains to be seen what the implications are for Pfizer, which employs 3,200 people across six sites in Ireland, and Allergan, which employs around 900 people, mostly in Westport, Co Mayo. There is no reason to think that the collapse of the deal will have a significant immediate impact, though it will no doubt cause both to re-examine their strategy.

Perhaps the most important message is in the way the US government has acted. Having failed with two earlier measures to stop the inversion bandwagon, the Obama administration has finally scuppered this big deal, even if it claims that its actions were not directly addressed at Pfizer/Allergan. The measures took the markets completely by surprise and the speed of action - most unusual in tax matters - reflects the huge political heat now around the issue of multinational tax , and the global scrap between governments to hold on to precious tax revenue. It is also a blow aimed at the big corporate lawyers and investment banks such as Goldman Sachs and Morgan Stanley who have made many millions from advising on such schemes.

It remains to be seen what this means for the OECD process aimed at closing tax loopholes. However it demonstrates again that the days of using tax as the main attraction for companies to locate here are coming to an end - and that there may well be significant implications for existing big Irish employers in the changes to come.