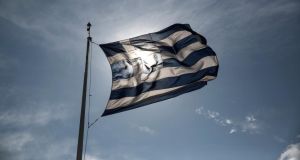 A Greek national flag flies from a flagpole on Acropolis hill in Athens, Greece, on Thursday Photograph: Bloomberg

Greek prime minister Alexis Tsipras will convene his inner circle to plot the next move in the standoff with international creditors after another round of top-level talks failed to yield a breakthrough.

After a meeting in Brussels with European Commission president Jean-Claude Juncker and Dutch finance minister Jeroen Dijsselbloem, who also heads the group of his euro-area counterparts, Mr Tsipras stuck to his position that any basis for an accord must be a Greek proposal. He said the plan should avoid the spending cuts and tax increases that creditors have drawn up in recent days. Months of impasse looked closer to being resolved this week after a flurry of activity starting with European leaders and the International Monetary Fund meeting in Berlin on Monday night. Mr Tsipras now returns to Athens with the euro region pressing for an agreement to be wrapped up by June 14th, according to a Greek official.

“Some say that nothing happens in those talks, but they’re wrong,” economic affairs commissioner Pierre Moscovici said on Thursday at a conference.

“Some others say that everything is solved; they are wrong also.”

Without access to capital markets, the country has to meet four payments to the IMF totaling more than €1.5 billion in June, while its euro-area-backed bailout also expires this month.

The first one is due on Friday, and Mr Tsipras signalled that Greece will meet it: “Don’t worry,” he said in response to a reporter’s question in Brussels.

Greek markets reflected the fluctuating expectations regarding a conclusion of a deal. Bonds rose, with the yield on the government’s two-year security extending this week’s decline by 19 basis points to 22.6 per cent.

The Athens Stock Exchange Index was down 2.7 per cent by late afternoon after rising 4.1 per cent on Wednesday.

There has been “certain convergence in certain areas,” but “there were certain areas where still opinions vary,” European Commission spokesman Margaritis Schinas said on Thursday.

Mr Juncker, Dijsselbloem and Mr Tsipras will meet again in coming days, though no date has been set, he said. Dutch news agency ANP reported the meeting could happen on Friday.

First, Mr Tsipras will later today meet his closest associates to evaluate the discussions in Brussels, a government official said. Asking not to be identified in line with policy, he said he wasn’t aware of another meeting planned.

“The realistic proposals on the table are the proposals of the Greek government,” Mr Tsipras told reporters early on Thursday in the Belgian capital. We can’t “make the same mistakes, the mistakes of the past,” he said.

Mr Tsipras said demands by the euro area and the IMF for cuts in the income of poor pensioners and increases in value-added tax on power are unacceptable, highlighting what have been red lines in Greece’s stance since his anti-austerity Syriza party swept to power in snap elections in January.

“Ideas like cutting benefits for low-income pensioners, or raising the VAT rate for electricity by 10 percentage points, can’t be a basis for discussion,” he said.

The premier sought to paint the commission, as more favourable to his proposals than are other creditor representatives deemed by Greece to be taking a harder line in the aid deliberations.

“There was a constructive will from the European Commission to reach a common understanding,” he said.

Greece has looked to the commission for support to dilute the austerity-first formula that has underpinned two Greek rescues totaling €240 billion since 2010.

This has led to clashes with creditors who say such bailout conditions have worked for other countries such as Ireland now out of aid programmes and Greece should get no special treatment.

1 Should my mam wait for house prices to drop before buying?
2 Cheers: Conor McGregor's whiskey races up the sales chart
3 Big majority uncomfortable returning to everyday activities
4 Why we’re about to learn if we are really in the A-team
5 US ‘hard seltzer’ drink White Claw launches in Ireland
6 Citigroup warns that markets are out of step with reality
7 McCanns’ Balmoral sees property value hit from Covid-19
8 Dublin drops out of top 50 in ranking of best cities for start-ups
9 ‘I have a talent for justifying purchases’
10 Michael Smurfit: ‘I asked Trump to invite me to the White House for my 80th birthday’
Real news has value SUBSCRIBE