Cutting the power cable – the rise and rise of wireless charging

Since the pioneering experiments of Nikola Tesla, wireless power transmission has been a dream, but is likely to breakthrough soon 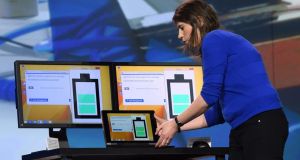 Wireless-charging technology is demonstrated during a keynote address at the 2015 International CES in Las Vegas. Photograph: Photograph: Ethan Miller/Getty Images 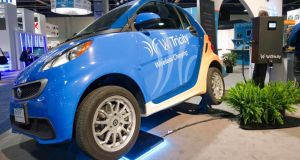 A WiTricity wireless car charger is shown under an electric car during the 2015 International Consumer Electronics Show in Las Vegas. Photograph: Steve Marcus/Reuters

Wireless communications have long swept over us, but wireless power transmission (WPT) has still not quite arrived, certainly not in Ireland. Yet, since the early 2000s, tech journalists and engineers have rapturously heralded the imminent wireless utopia which will rid the world of “battery anxiety”, the gross global landfills of toxic disposable alkaline batteries, and our cumbersome domestic boxloads of cables and chargers – with the umbilical cry “Cut the cord!”.

Magnetic induction was discovered by Michael Faraday back in 1831, and described by James Clerk Maxwell and Heinrich Rudolf Hertz, but the patron saint of WPT is Nikola Tesla.

Credited with discovering the rotating magnetic field, alternating current (AC) and radio-frequency resonant transformers – or Tesla coils – for generating megavoltage, high-frequency AC electricity (which he used to generate X-rays, radio transmission and wireless telegraphy), he demonstrated wireless electricity transmission in 1893 at Chicago’s World Columbian Exposition when he lit up vacuum bulbs across a stage; and conducted alarming resonant coupling experiments at his Colorado Springs lab in the 1890s, where he lit three incandescent lamps at a distance of about 30m. His dream for his famous Wardenclyffe tower in Long Island (demolished as a wartime precaution in 1917) was to transmit power transcontinentally, even globally.

Most of the WPT consumer-tech action these days is in “near-field” electromagnetic induction, using an electromagnetic field generated by a transmitting coil to produce an electric current in a receiving coil. The most common basic applications available – radio-frequency identification (RFID) chips from library cards to animal chipping or contactless chip-card swiping, such as the Leap card for public transport in Ireland – involve batteryless passive devices which are powered-up by the “reader” device.

Wireless charging is rather different, transmitting the energy sufficient to power devices or charge batteries. It was first brought to the consumer market in the 1990s by Braun’s electric toothbrush, which had two closely positioned coils within the cradle charger and the brush handle for brief low-voltage use.

But more powerful WPT has been a long time breaking through to the rest of the tech world, partly because of the limitations of the laws of physics, while manufacturers hesitate to incorporate wireless charging in the absence of firm industry standards.

The first of these was Qi, now incorporated in phones such as Nokia’s Lumia, Google’s Nexus, HTC, Fujitsu and LG; while charging sleeves and cases are available for Apple and Samsung. Neither Maplin nor Carphone Warehouse in Ireland have any wireless charging products instore, and even the very few wireless chargers pads and cases on Maplin’s website are not shipped directly to Ireland, only to the UK. One store adviser told The Irish Times that LG- and Nokia-compatible wireless chargers he had experienced were highly unreliable.

First out of the traps in 2008 was the Wireless Power Consortium (WPC) which, backing Qi, led the pack until recently, supported by Nokia, Samsung, Blackberry, Sony, Motorola, LG, HTC and Huawei. Initially for inductive low-power transfers at distance up to 4cm, it has gradually powered up as it began to adopt magnetic resonance.

Power Matters Alliance (PMA) – set up by Powermat Technologies and Procter & Gamble in 2012 – is backed by Duracell, AT&T and Starbucks.

That said, many of these corporate players hedged their bets: Qualcomm joined both the WPC and PMA, while Samsung backed start-ups using Qi. As ever, Apple stands aloof (and were not available for comment), but will surely be pushed to plump for one standard or the other once universality beckons.

The latter took a step forward last February, when PMA signed an agreement to share some technologies with A4WP, from Rezence’s magnetic resonance system to PMA’s open network software – even while many industry-watchers commented that there seemed to be little technical difference between PMA and Qi specs. But last week, A4WP and PMA announced that they had agreed to merge, happily anticipating “the transition to vast economies of scale”. Their combined board features a galaxy of global brands now united around WiTricity’s Rezence. WiTricity product manager Kaynam Hedayat modestly says this is less about winning a “war of the standards”, more “an evolution and natural progression”.

Intel is looking to incorporate Rezence into a batch of completely wireless laptops next year, when Toyota will build it into its fleet of hybrid Prius cars. Medical manufacturer Thoratec will use Rezence for their next-generation heart pumps.

Standard magnetic induction is efficient only over very small distances as the field strength tails off rapidly, and WiTrcity make much of their system of finely tuned, “strongly coupled” magnetic resonance between their high-precision coils. The system has evolved from a 2006 breakthrough by physicists Marin Soljacic and André Kurs at the Massachusetts Institute of Technology (MIT), when they managed to illuminating a 60-watt bulb across two meters away with 40 per cent efficiency.

WiTricity has since finessed the system, and its CES future-home exhibits hosted a suite of consumer products embedding its receivers; while wall-mounted Rezence transmitters extended out along passive “resonant repeaters” under floors or embedded in furniture.

Larger wall-mounted coils can power a 100-watt HDTV over a few centimetres; while large-ish devices such as laptops can be recharged from a few metres away. Several smaller devices can be powered simultaneously, without needing to sit on pads, or be orientated any particular way.

Electromagnetic fields are made up of electrical and magnetic components. Of the fields Rezence transmitting coils generate, WiTricity claims that most of the electric component is trapped inside the transmitter, stripping out the external electric field from the wider, oscillating magnetic field. The latter is thus “non-radiative” and “interacts very weakly” with biological tissue, being “about the same intensity as the Earth’s magnetic field” – and thus complies with safety regulations on exposure limits. They also say they carefully select field frequencies to avoid interference with devices such as pacemakers.

WiTricity’s sights are set on industrial and even military applications, including reducing soldiers’ helmet kit-weight by shifting wireless power to their backpacks; while they have developed 1.5sq ft floor “power mats” which can send 3.3 kilowatts to electric cars or larger vehicles from about 70cm. The dream is Rezence hotspots in public spaces and, within two to three years, on roads, charging electric vehicles as they drive.

Physicists and engineers puzzle over some of Rezence’s claims (the Earth’s magnetic field does not oscillate, for instance); while some key magnetic resonance induction patents were filed by the University of Auckland’s John Boys and Andrew Green back in the 1990s.

One member of that team now works with German induction power industry leader IPT Technology, which has been using resonance WPT systems on automated assembly lines at BMW and Audi since 2000.

Since 2002, IPT have provided wireless recharging stations for buses in Turin and Genoa; and more recently in Germany, the Netherlands and the UK. Later this year, with Transport for London, they will begin trialling inductively charged hybrid double-decker buses which can wirelessly recharge at stands at either end of the route; part-funded by the EU’s European Zero Emissions Urban Bus System (ZeEUS) programme.

This summer in Sweden, the city of Gothenburg, Volvo and Swedish Transport plan to install rapid inductive charging rigs that take just minutes to top up electric bus batteries; with a 500m inductive charging pathway to power the bus wirelessly while in motion. (Due to straitened finances, Ireland’s NTA are not looking at adopting even hybrid buses, certainly not wirelessly rechargeable ones).

“Far-field” techniques are also ideal for high-energy transmission for aerospace or military applications. Microwaves have long been proposed for power-beaming from solar-powered satellites to Earth; while the US military’s non-lethal Active Denial System “Heat ray” was deployed but saw no action in Afghanistan.

Meanwhile, US company LaserMotive is building on its 2012 achievement when it remotely powered a Lockheed Martin Stalker UAS reconnaissance drone with a laser during day and night operations in a “remote desert location”.

Would Tesla have been thrilled – or horrified?