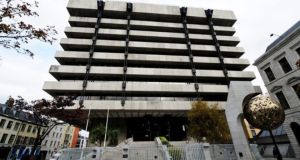 The Central Bank and the State’s credit unions are set for a showdown next week after an umbrella group accused the bank of adopting an incoherent approach to the sector.

It said the Central Bank was acting beyond its powers in an attempt to introduce “wide- scale and significant consolidation” across the sector.

The Irish League of Credit Unions (ILCU), together with Maynooth Credit Union, is taking a judicial action against the Central Bank after expressing concern about “the coherency and proportionality of its decision making in relation to regulatory directions”.

The Central Bank has applied to the courts to have the review heard in camera, but the ILCU wants it to be heard in open court.

It has accused the bank of trying to “cloak the proceedings and the challenge to its decisions from public scrutiny” in circumstances where, the ILCU says, there is “no need to do so or any risk involved in an open deliberation”.

A hearing of the judicial review has been set for next Wednesday.

‘Operate openly’
The ILCU said yesterday that it was “important that State regulators operate openly, clearly and accountably”, and it warned the Central Bank against trying “to scare the public or exaggerate risk for the sake of achieving unarticulated policy objectives” .

It said that it operated “in an open society with an educated public capable of digesting contradicting views, and the law will uphold this”.

“If anything, the correct way to deal with these issues is with sunlight and transparency rather than to hide this dispute from the public eye.”

Ireland has one of the biggest networks of credit unions in the EU, with more than 400 branches across the State.

However, many have struggled with underperforming loans, and 58 per cent are under lending restrictions over concerns over corporate governance loan books.

The Central Bank is in the process of implementing a major reform of the sector.

This will see management come under greater scrutiny, while many credit unions are likely to face major restructuring, with weaker unions being forced to merge with stronger ones.

The cost to the State of the rationalisation is expected to be in the region of €250 million.

Confrontation
A confrontation now seems likely, with the ILCU claiming yesterday that its member unions were “very different from the banking sector”.

It pointed out that it had “not been exposed to the same losses and has not had the benefit nor has it needed a State guarantee”.

It said it had shown “resilience” and “illustrated the need for a viable, local and on-the-ground alternative to the banks”.