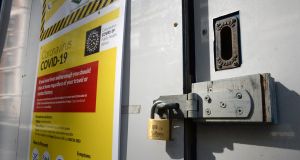 Strong differences over the pace of reopening the economy are evident in media coverage this weekend. Photograph: Dara Mac Donaill

If the Government does not rescue small businesses and stabilise employment, the State will have to bail out the banks once more, former top civil servant John Moran tells the Sunday Independent. The paper reports that an economic assessment presented to Cabinet last week warned that Ireland’s extended lockdown and “unclear” reopening plan will see many businesses having to close permanently.

But in the Business Post, pandemic health expert Anthony Staines warns that easing lockdown restrictions before more ambitious goals in tackling the virus were met would result in Ireland “being bounced right back into lockdown again”. Dr Staines, professor of health systems at Dublin City University made his comment sin a letter to the new Dáil committee on the Covid-19 response.

Chill Insurance is being courted by British private equity group Livingbridge, according to the Sunday Times. The Irish broker, which is undergoing a strategic review at the moment, is reported to have attracted interest from a number of private equity groups.

Small businesses have tapped just €33 million of a €200 million State-backed fund put in place to provide working capital during the Covid crisis, writes the Sunday Times. More than 2,000 businesses have expressed interest in the Strategic Banking Corporation of Ireland scheme but it has been criticised for being too complex, the paper says.

The Sunday Times also reports that mobile phone group Vodafone has written down the carrying value of its Irish subsidiary by €630 million, or around a third, to €1.2 billion in a move that reflects future expectations for growth and average revenue per user.

The Sunday Independent reports that three private equity firms have made bids for Irish-Canadian listed group IPL Plastics – formerly One51. Irish investors own 45 per cent of the business which listed in Montreal in 2018.

San Leon chief executive Oisin Fanning has spent more than €20 million to buy a stake of more than 20 per cent and bring his interest in the business to just under 24 per cent, according to the Business Post. The shares appear to have been acquired from the company’s largest shareholder, Toscafund, which still retains a 50.8 per cent stake in the business.