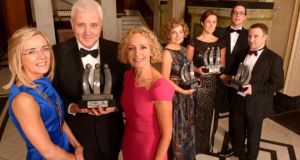 Cork is competing on a global stage thanks to the pioneering spirit of its people who have helped shape its economic development, Cork Chamber president Gillian Keating told the group’s annual dinner.

What had impressed her most during her two years in office wasn’t necessarily advances in technology or investment in infrastructure but rather the dynamism and vision of the people driving Cork forward, Ms Keating told some 1,000 guests at the event.

“Even in this wildly creative age, we are successfully competing and exerting influence on a global scale from Cork,” she said.

“It is people who define this region, people who have great ideas and an insatiable appetite for solutions, people with the courage and ambition to solve some of the world’s toughest problems, people who are being observed by others outside of this city and this country”.

Meanwhile Vibes and Scribes owner, Joan Lucey said she was honoured that the bookshop and craft shop had won the inaugural Cork Chamber retail award.