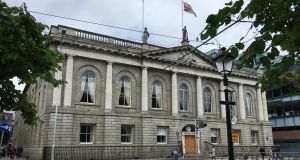 RCSI, St Stephen’s Green. In High Court proceedings, the siblings claim that, for more than 20 years, they have been accommodated by rights of way from their properties over the college’s land. Photograph: Bryan O’Brien

A right of way dispute involving the Royal College of Surgeons of Ireland and siblings who own apartments adjoining the college’s property at Stephen’s Green in Dublin has come before the Commercial Court.

The action arises out of the RCSI’s plans to demolish an existing building and build a new €88 million education and research facility at its property at the Ardilaun Centre, close to apartments at Ardilaun Court owned by Sharon O’Malley and her brother Conor O’Malley.

In High Court proceedings, the siblings claim that, for more than 20 years, they have been accommodated by rights of way from their properties over the RSCI’s land without interruption.

They claim they made submissions in January 2019 concerning an application to Dublin City Council by the RCSI for planning permission to carry out its proposed redevelopment on the site.

They claim the college responded by demanding they cease exercising their rights of way and accused them of trespassing.

The denial of their rights was motivated by “spite and malice” and was intended to intimidate them in their right to participate in the planning process, they claim.

The O’Malleys called on the RCSI to recognise their rights of way, but claim the RCSI has failed to do so.

Their claims are denied by the RCSI which does not accept they enjoy a right of way over the Ardilaun Centre.

In their action, the siblings seek various orders and declarations including they are accommodated with a right of way from their properties at Ardilaun Court over the RCSI’s adjoining premises.

They also seek orders restraining the RCSI interfering with their rights of way, directing the Property Registration Authority to provide for their alleged right of way, and damages.

The dispute was admitted on Monday to the fast track Commercial Court list by Mr Justice Robert Haughton.

The RCSI, represented by Esmond Keane SC, applied to have the siblings’ case fast-tracked over concerns the legal dispute could prevent the implementation of any planning permission granted on foot of the RCSI application.

Given the substantial investment in the proposed redevelopment project, on which €7 million has already been spent, the RCSI is most anxious to remove the uncertainty and have the matter determined as soon as possible, he said.

Any delay to the implementation of any permission would have significant consequences for the RCSI in terms of its financing arrangements for the proposed new facility, he said.

The O’Malleys, represented by Peter Bland SC and Dolores Keane, opposed the fast track application, arguing the case does not have a commercial component and is a dispute concerning rights of way.

The judge said he was satisfied to admit the case to the Commercial Court list and adjourned it to the next law term.