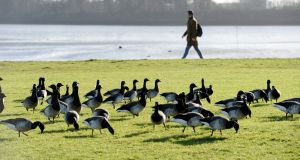 An action aimed at having lands in Dublin earmarked for a major housing development designated as a special area of conservation is to be fast-tracked.

Clonres CLG, a representative organisation for residents of Clontarf, wants to have lands at St Paul’s, Sybil Hill Clontarf, designated a special area of conservation (SPA).

It also wants the lands maintained in a condition that will prevent the disturbance of light-bellied brent geese and the black-tailed godwit.

Those reliefs are sought under the EU habitats directive, birds directives and the 2011 European Communities (Birds and Natural Habitats) regulations.

The proceedings are against the Minister for Arts, Heritage and the Gaeltacht, Ireland and the Attorney General, and Crekav Trading GP Limited, which owns and plans to develop the lands in question.

Clonres, which says it is concerned with the protection of the environment of Clontarf, says the lands, former playing pitches at the rear of a local school, are an important feeding ground for the brent geese and godwits.

The geese, the court heard, come to Ireland in October before returning to Greenland in the spring. The lands have not been designated for protection of any other species.

The group’s application to have the site designated as a SPA is opposed.

On Monday, Crekav, part of the Marlet property group, applied to have the matter admitted to the fast-track Commercial Court .

Represented by Declan McGrath SC, Crekav says the residents’ case could adversely affect its plans to develop the lands should planning permission for the proposed residential development on the lands be granted.

Crekav claims its commercial activities and the lands are valued in the “tens of millions of euro”. The case was admitted to the Commercial Court list by Mr Justice David Barniville on Monday.

The lands have been the subject of other High Court proceedings. In 2018, Clonres and environmentalist Peter Sweetman challenged An Bord Pleanála’s decision to grant the developer permission to build in excess of 500 houses on the lands.

The board’s decision was quashed on consent and the matter remitted for reconsideration. In September 2018, the board refused the remitted application.

Crekav has challenged that decision, and judgment is awaited on that.