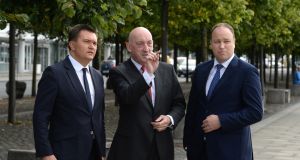 Glenveagh Properties has welcomed a plan to clear older industrial estates in Dublin for high-density residential housing after it raised €213 million at an extraordinary general meeting on Monday.

The housebuilder said news that large-scale mass rezoning could lead to Dublin’s industrial estates being replaced by residential homes was “positive” and “makes sense where these industrial parks are no longer being utilised”.

Stephen Garvey, the company’s chief operating officer, instanced the case of the Luas extension to Broombridge, where he said it makes “perfect sense to develop that into residential to get long-term benefit from those lands”.

Garvey was speaking to journalists after a meeting at which shareholders approved a placing that raised €213 million. The capital raise comes as the company seeks to “further capitalise on the recovery of the Irish residential property market” through continued land acquisitions.

That recovery is currently seeing house prices grow between 11 and 12 per cent per year, but Glenveagh noted that in the new housing market the growth rate is between 5 and 6 per cent. The Irish-listed company is sitting on land bank capable of accommodating around 11,000 homes and Mr Garvey noted that house prices will remain in positive territory for the foreseeable future.

“To take negative inflation you’d need oversupply and you’d need a credit correction. Mortgages are at around €9.3 billion, a normal mortgage market should get somewhere between €12 [billion] to €14 billion.”

Mr Garvey also dismissed concerns surrounding a bubble in land prices, noting that acquisitions in today’s market are through equity, contrasting with 2006 when debt fuelled purchases.

“I think you’ll see more land being freed up, I think it’s pretty much been indicated by the State they’re going to do all they can to free up as much assets as possible.”

Since its initial public offering in October of last year, Glenveagh says it has evaluated more than €1.6 billion of land opportunities. Since its IPO the company has purchased land assets worth about €404 million, consisting of 42 sites. It has also signed agreements proposing acquisitions with the potential to deliver more than 2,130 properties.

The group has more than 800 properties under construction at present, with a development in Greystones, Co Wicklow, and Dundrum in Dublin expected to come to market by the first quarter of next year. Glenveagh is hoping to be in a position to construct about 2,000 units a year by 2023.

Justin Bickle, the company’s chief executive, declined to comment on whether the last remaining waterfront development site in Dublin’s north docklands – on the market with a guide price of €120 million – was of interest to the company.

1 Opioid executive admits to ‘no morals’ ahead of prison term
2 Are there annual limits on inheritances or gifts to a child?
3 American YouTubers embrace the crisp sandwich
4 Fallon & Byrne founders McHugh and Byrne exit group
5 Farmer seeks to challenge €3.6bn Intel plan in High Court
6 Who are Ireland’s 17 billionaires?
7 NI businesses fear burden of post-Brexit red tape on goods transport
8 Council tells Johnny Ronan firm to keep the noise down at D4 Embassy venue
9 My father in a nursing home wants to gift me his house
10 Cathay Pacific to resume Dublin-Hong Kong flights in March
Real news has value SUBSCRIBE