Dublin has 400 houses and apartments under construction 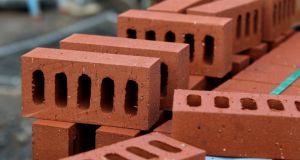 A total of 397 homes were at various stages of completion in Dublin in November; of these 229 were apartments. Photograph: David Davies/PA Wire

A snapshot of residential construction activity in the capital in November showed six large housing estates of more than 20 homes and seven smaller development of up to 20 units had builders on site.

A total of 397 homes were at various stages of completion; of these, 229, more than half, were apartments. The figures refer to estates of five or more homes and do not include one-off houses or small infill developments.

The largest development is on the site of the former UCD veterinary college in Ballsbridge, Dublin 4, where almost 100 apartments are being built on what was the most expensive site per acre in the country at the time of its purchase in 2005.

On the other side of the city in Clontarf the second largest development under way was in the final stages of completion last November with around 60 apartments being built on the site of the former Dollymount House. The pub was bought by John McKeon in 2006 for close to €15 million, but it was more than 2½ years later that the McKeon family company, MKN Developments, secured permission from An Bord Pleanála for the development.

Back on the south side, 36 houses are being built on Orwell Park at the former home of one of the most well-known entrepreneurs of the 20th century, William Martin Murphy, owner of Clerys, the Imperial Hotel and the Dublin United Tramway Company. Murphy was leader of Dublin’s employers during the 1913 Lockout. Mill Hill Missionaries sold Dartry House and the adjoining 3.9 acres for €30 million in May 2005 to Eugene Renehan’s Walthill Properties.

Other smaller developments under way include 14 houses at the former Winfield Motors site on Maxwell Road, in Rathmines; 19 houses on Grace Park Road in Drumcondra; 16 apartments and three houses on Bluebell Road in Dublin 12; and 15 houses and four apartments at Gateway Crescent in Ballymun.