Developers slow to build so they can boost profits – Nama 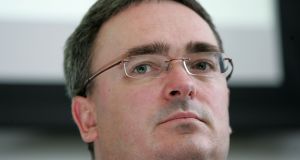 Nama chief executive Brendan McDonagh: he said that many of the developers are “not satisfied” with a profit of €20,000 per house and want to wait until prices rise to the point where it reaches €50,000 or more. Photograph: Frank Miller

Responding to questions from an Oireachtas committee on Nama’s role in tackling the housing shortage, Mr McDonagh said that developers can now expect to earn a profit of €20,000 on a newly built home that sells for €300,000.

However, he said that many of them are “not satisfied” with a profit of €20,000 per house and want to wait until prices rise to the point where it reaches €50,000 or more.

“It’s profitable to build houses,” Mr McDonagh said. “It’s a question of how much profit people want to make.”

Mr McDonagh said that it has taken a 35 per cent rise in property prices since 2013 to make residential construction viable again. A three-bed home in Dublin, which sells for €300,000, costs €260,000 to €280,000 to build. Central Statistics Office figures show that, as recently as April 2014, the same house would have sold for about €240,000, well short of break-even. Nama chairman, Frank Daly, stressed that the agency could not fund residential building on that basis, as it would not have been confident of getting a commercial return.

A Nama review of its borrowers’ residential sites showed that it can now develop 13,200 new homes on a number of them. It can provide the remaining 6,200 once it gets other sites serviced.

Nama expects to earn more than €1 billion in profits this year, more than double the €473 million it generated in 2014. Mr Daly told the Oireachtas Committee on Finance, Public Expenditure and Reform that it expects to pay a €2 billion surplus to the State once its work is finished in 2020.

The chairman wrote to Mr Cushnahan last month, asking why he did not declare that he, former Northern Ireland first minister Peter Robinson and lawyer Ian Coulter met a potential bidder for the Northern loans, US fund Pimco, in May 2013, while he was still a member of Nama’s Northern Ireland Advisory Committee.

Mr Daly said that Mr Cushnahan has yet to reply to his first letter and added that he wrote to him again this week.