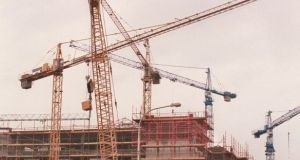 About three-quarters of builders warned that the labour squeeze was hitting their ability to finish new homes and infrastructure on time.

Builders are struggling to hire skilled workers in key trades, hitting their ability to finish houses and infrastructure on time, a new study shows.

A Construction Industry Federation (CIF) survey has found that almost nine out of every 10 companies have difficulty recruiting skilled workers.

The federation says there is high demand for wet trades such as block laying, plastering, tiling and painting-decorating.

About three-quarters of builders warned that the labour squeeze was hitting their ability to finish much-needed new homes and infrastructure on time.

Dermot Carey, CIF director of safety and training, said on Friday that despite a 25-year pipeline of projects and opportunities to work abroad, the number of young people signing up as apprentices was static or declining.

“Unfortunately, schools are only considered truly successful when over 95 per cent of their students goes on to third level,” Mr Carey said.

He added that the high number of students who drop out of college after one year showed the problem with this approach.

L&M faces difficulties recruiting staff such as engineers, particularly design engineers, project managers and construction managers. “It’s a strategic issue for the industry and the country as a whole,” Mr Hoyne said.

“We’ve been hearing a lot about construction inflation recently and the lack of available staff feeds into that.”

He added that the lack of tradespeople, and particularly apprentices, was more severe.

“The apprenticeship system took a hammering during the downturn and it’s probably the slowest to recover,” Mr Hoyne noted.

He pointed out that there were currently no apprentice tilers in the Republic and few people training for wet trades.

“If the Government is looking at rolling out the national development plan, building schools and hospitals, we’re going to need these workers coming through the system to do these jobs,” he said.

Builders hired staff from regions such as eastern Europe during the construction boom that ended a decade ago, but fewer of these workers are seeking employment in the Republic this time around.

The CIF has asked the Department of Business, Enterprise and Employment to lift restrictions on giving work permits to tradespeople including bricklayers, roofers, plumbers, plasterers and painter-decorators from outside the European Union.

The department is due to finish a review of the Republic’s work permit system shortly.

Mr Carey said that in 2016, accountants EY, economic consultants DKM and training body Solas, predicted that the Republic would need 112,000 additional workers up to 2020 to meet Government housing and infrastructure targets.

Since then the number new homes needed has risen by a third to 35,000 a year and the Government published the National Planning Framework and the Ireland 2040 development plan.