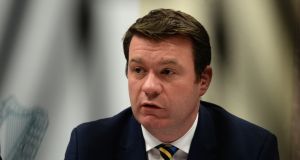 Alan Kelly: “I will not stand for shoe-box living that was the hallmark of the Fianna Fáil governments of the past”

“I will not stand for shoe-box living that was the hallmark of the Fianna Fáil governments of the past.”

Those were the words of Minister for the Environment Alan Kelly as he launched updated guidelines on apartment sizes and facilities yesterday.

Developers will be allowed build studio apartments more than a quarter smaller than the current minimum size of a one-bed apartment in Dublin, set at 55sq m.

The new 40sq m minimum threshold is 2sq m more than the “shoe boxes” built in the property boom years of the mid-1990s.

The Planning Guidelines on Design Standards for New Apartments make a virtue of the fact the majority of apartments will exceed the former guidelines by at least 10 per cent, but that still leaves them well short of the current minimum threshold in the capital.

Council rules on the number of apartments in a scheme requiring windows on at least two aspects are being watered down, as are council requirements on lift access.

And local authorities will have no power to set higher standards under the new guidelines, it has emerged.

The Minister noted just 2,700 units of housing were delivered in Dublin this year, far short of the 8,000 needed. “Viability of new construction, especially for apartments, is one factor holding back supply,” he said.

He blames an “upward spiral of new planning requirements” by some councils that had failed to carry out “proper analysis of their economic impact on the people who must ultimately pay: ordinary renters and apartment dwellers”.

An alternative reading of the new rules is that developers have forced the Government’s hand simply by sitting on their own.