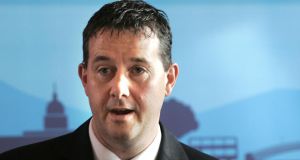 Paul Gogarty: he said he and his colleagues were trying to prevent over-development in the area. Photograph: Dara Mac Dónaill / The Irish Times

Builder New Generation Homes is set to clash with county councillors who are bidding to have a site that it has already earmarked for housing rezoned as a green area.

An Bord Pleanála recently shot down the company’s application for permission to build 58 new homes at Coolamber, near Finnstown, in Lucan, Co Dublin, on the grounds that it should have sought the go-ahead for more than 124 houses.

The company originally wanted to build 119 houses on the land but reduced that following consultations with South Dublin County Council, whose members wanted fewer homes built there.

Tomorrow the council will debate a motion from independent members Paul Gogarty, Guss O’Connell and Liona O’Toole seeking to have the site at Coolamber, Lucan, rezoned as open space.

New Generation said the motion means the council is being asked to consider permanently blocking any house building on a prime residential development site that is fully serviced, zoned for development and close to bus and rail services.

The company stated that the site has already been the subject of a “bizarre” planning process that resulted in An Bord Pleanála rejecting a plan largely because of changes sought by councillors.

New Generation chief executive Pat Crean argued that if houses cannot be built on the Coolamber site, they cannot be built anywhere. “There is no logic behind the sustained campaign to stop the building of houses here except the ‘not in my back-yard’ logic,” he said.

“The law says that if councillors are to go against the advice of their own planners they have to give good reasons. We have seen none whatsoever. This is a much bigger issue than this site, and could threaten the building of badly needed housing in many parts of Dublin.”

Mr Crean explained that its original plan to build 119 homes there was in line with Department of the Environment guidelines, but New Generation cut this to 74 on the council’s request.

Councillors then voted, against their own officials’ advice, for a tree preservation order at the site. This resulted the company reducing the number of houses to 58. An Bord Pleanála then said the trees were wholly unsuitable for protection.

Similarly, Mr Crean said that the company adjusted its original plans giving locals access through the planned estate to deal with objections raised by councillors. An Bord Pleanála also singled out the adjusted proposals out as unsuitable.

Mr Gogarty said he and his colleagues were trying to prevent over-development in the area.

He argued that locals and politicians wanted to see development there scaled back and the motion was simply designed to secure that. “An Bord Pleanála’s decision was wrong,” he argued.