What’s coming up in the business week ahead 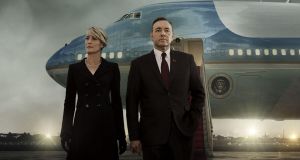 ‘House of Cards’: Netflix is due to report results on Monday

The online auction platform last released its earnings results on April 26th, reporting $0.47 earnings per share for the quarter, topping the consensus estimate of $0.45.

The company had revenue of $2.14 billion for that quarter, compared to analysts’ expectations of $2.08 billion. The firm’s revenue for the quarter was up 3.7 per cent on a year-over-year basis.

Analysts predict earnings for the current quarter to come in between $0.40 and $0.44. That is compared with the $0.42 in earnings per share it reported during the same period last year.

The company is expected to report second quarter revenue of $2.17 billion

Credit Agricole is forecasting the company to post earnings of $1.58 per share for the year, up from their prior forecast of $1.57. Credit Agricole also issued estimates for eBay’s full-year 2017 earnings at $1.71 EPS.

The European Central Bank governing council meets this Thursday, but traders have lowered their expectations of further easing.

The Bank of England left interest rates unchanged last week, after the majority of the bank’s monetary policy committee voted to keep rates on hold at 0.5 per cent, easing pressure on the ECB to act immediately.

Bank of England governor Mark Carney said he was not a fan of the ECB’s negative interest rates.

The Bank of England rates decision surprised investors, who had priced in more than an 80 per cent chance the rate would be lowered.

Money markets now price around a 20 per cent chance that the ECB cuts rates by 10 basis points to minus 0.50 per cent next week, having seen around a 30 percent chance before the Bank of England decision.

An analyst at BMO Global Asset Management said the ECB will not act directly just because the Bank of England has done something, adding that any change in growth outlook in Britain is very likely to also impact growth in Europe. However, he said he wouldn’t be surprised if the ECB continues to loosen monetary policy.

Earlier this year, the ECB cut its main interest rate to 0 per cent, taking the financial markets by surprise. It also cut the interest rate on deposits held by banks at the central bank to minus 0.4 per cent from minus 0.3 per cent.