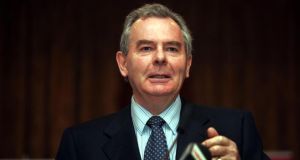 The alleged conspiracy by members of the family of Seán Quinn, two Middle East law firms and others to move assets worth hundreds of millions out of the reach of the Irish Bank Resolution Corporation grows ever more complex.

Last week in the Commercial Court, lawyers for the former Anglo Irish Bank detailed new information that they say “continues to emerge” about what is allegedly going on.

IBRC said it believed a company called Corlex, with Latvian directors, had made substantial payments to help the Quinns with their legal costs in their epic battle against the bank which is now in liquidation.

The Quinn family, for its part, has denied any wrongdoing and has countersued IBRC. They believe the bank illegally moved to seize their overseas assets which include the Kutzoff Tower in Moscow and Univermag, a shopping centre in Ukraine. They have also claimed they acted at all times in a proper manner.


Transactions
Lawyers for IBRC have said they believe this is not the case. They claim Dubai-based law firm Senat has been involved in transactions relating to Russia, Belize, Cyprus, India, the United Arab Emirates, Panama, Liechtenstein and Ireland, which are designed to prevent the bank getting control of the family’s overseas assets.

The scheme, IBRC claims, involved actions relating to Sweden, Ukraine, Austria and Zurich, in what IBRC contends is an alleged asset-stripping exercise on behalf of the Quinn family involving properties worth hundreds of millions.

IBRC has sought orders directing Senat to discover documents relating to dealings on behalf of the Quinns.

Jarlath Ryan BL, for the Senat defendants, has denied they had any involvement in the alleged conspiracy and pleaded they had acted bona fide in relation to incorporating companies and providing legal advice in various jurisdictions.

Senat said it was prepared to make discovery of documents but objected to the extent of discovery sought as too broad and disproportionate.


Substantial payments
IBRC’s claim during this court case that a New Zealand company called Corlex had made substantial payments in relation to the Quinn’s costs adds yet another dimension to an already complex affair.

Corlex was set up by a Latvian called Voldemar Spatz and a later director was another Latvian called Inta Bilder. Both men are the directors of hundreds of companies around the world including some which have been linked to serious financial scandals.

The Organised Crime and Corruption Reporting Project, a consortium of investigative centres, journalists and media organisations throughout the Balkans and eastern Europe, has written extensively on the topic of “proxy” directors in the region.

The conclusion of their report states: “The system is built on hundreds, maybe thousands, of ever-morphing phantom companies. They exist on paper only and appear to be run by scores of common people, who are, in fact, simply proxies. Many are unaware their names appear in official documents as the human face of a company. Others are naive or don’t care.”

1 In this strangest of recessions, what happens next for Ireland?
2 Michael O’Leary is the boss you want to lead an airline out of crisis
3 Bank of Ireland sees about 2,000 staff apply for voluntary redundancy
4 Estée Lauder staff at Dublin airport plan further strike action
5 Minister seeks AG’s advice on banker accountability laws
6 EY Entrepreneur of the Year: nominee profiles
7 Should I switch bank now with Ulster Bank at risk of closing?
8 Online shopping makes town centre jobs unviable, says Next boss
9 Irish company to test vaccines on volunteers deliberately infected with Covid-19
10 Air travel never going ‘back to way it was’
Real news has value SUBSCRIBE