Peter Sutherland to have role in reform of Vatican finances 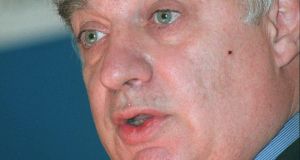 Peter Sutherland: will be involved in implementing any proposed reforms

Former attorney general Peter Sutherland will play a role in the ongoing process of curia reform instigated by Pope Francis.

As a “consultor” to the Administration of the Patrimony of the Apostolic See (Apsa), often known as the Vatican’s treasury ministry, Mr Sutherland will be involved in the revision and overhaul of Holy See finances and economic organisation.

The Holy See announced yesterday that, in the interests of transparency, a process of “due diligence” had begun at Apsa.

The news came on the same day as the retirement of the Vatican secretary of state, Cardinal Tarcisio Bertone, underscoring the wind of change blowing through the Vatican.

Mr Sutherland, who has served on the “extraordinary section” of Apsa since 2006, will be involved in implementing any proposed reforms that emerge from the“due diligence” being carried out by US firm Promontory Financial Group.

At a Vatican meeting with the so-called “finance” council of cardinals in July, where Mr Sutherland outlined “the macro- economic situation and the investment policies” of Apsa, he agreed to join a new “supervisory board”.