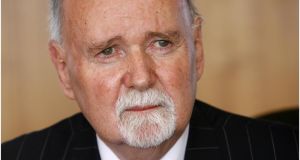 The book aims to demystify corporate governance and sets out the basic standards of good practice for banks, businesses, charities and community groups.

The book saves the best for last, however, with a fascinating series of case studies on how not to do it from Fás to most notably Michael Fingleton’s (inset) Irish Nationwide Building Society.

Duffy concludes INBS was a corporate governance “debacle,” and identifies seven key lessons to be learned from the rogue building society.

These include the board being “too small to perform its role,” and the need for its chief executive to have his “performance reviewed annually”.

“Failures in corporate governance were at the heart of the Irish banking crisis. Reports on the banking crisis identified weak governance in Irish banks as one of the key ‘home-made factors’ that contributed to the Banking Crisis,” Duffy concludes.

Members of the long-awaited bank inquiry – as well as anyone thinking of becoming a director – could do worse than take a note of this new book’s contents.