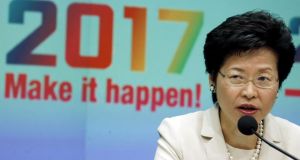 Hong Kong’s top administrative official, Carrie Lam, was in Dublin this week. She gave an apparently charming speech to an audience of business people at the Westbury Hotel on Tuesday. Although, given the country she was in, she inevitably mentioned priests.

Among those listening were Minister of State at the Department of Finance Simon Harris, Chinese ambassador to Ireland Jianguo Xu and Irish Times managing director Liam Kavanagh, representing Dublin Chamber.

Lam spoke of the small but perfectly formed Irish community in Hong Kong, a former British territory now under the protection of China.

She gave a nod to the Irish Chamber of Commerce in Hong Kong and the local GAA club. There is also apparently an Irish-themed singing group, Celtic Connections, “which boasts both a choir and an orchestra devoted to Celtic and contemporary music”. Sounds lovely.

And then came the priests. Irish Jesuits led by a Fr Gallagher from Cork took over the prestigious Wah Yan school in the 1930s. “I am thankful for the high-quality education brought by the Irish Jesuit fathers as both of my sons are graduates of Wah Yan primary school,” said Lam.

Lam also mentioned Hong Kong’s first St Patrick’s Day parade this year: “I can assure you there was plenty of emerald green to marvel about, from the hairpieces on parade to the celebratory pints at Hong Kong’s Irish pubs.”

I’d say a few of its denizens felt a bit green around the gills the next day, too.

1 Irish people like nothing more than being bribed with their own money
2 Being in Nama regarded as stigma in UK, O’Flynn tells court
3 Greencore investors urged to spurn Coveney’s €315,000 pension
4 Climate apathy in Northern Ireland could impact on the Republic
5 Hogan warns Britain on US trade deal as EU set to impose tariffs
6 EU considers five-year ban on facial recognition tech in public areas
7 Ministers ditch Davos for electorate’s doorsteps
8 The Irish economy is thriving but if you’re not feeling it – here’s why
9 GoMo is being investigated by advertising authority
10 Barclays to cut 100 senior roles as lender seeks to rein in costs
Real news has value SUBSCRIBE