Former Enron CFO Andrew Fastow: ‘You can follow all the rules and still commit fraud’ 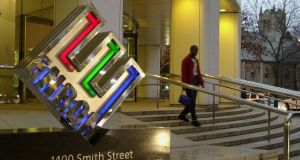 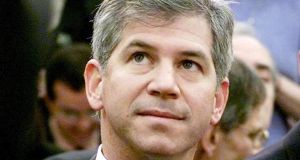 Former Enron Corporation chief financial officer Andrew Fastow: he masterminded a network of off-balance-sheet entities and shell companies to conceal massive losses that led to Enron’s bankruptcy in 2001 and prison for him. Photograph: Larry Downing/Reuters

In one hand, Andrew Fastow, the man who devised some of the most clever off-balance sheet instruments at Enron that led to the biggest collapse in US corporate history, holds up an award he won as chief financial officer of the year.

In the other hand Fastow, one of the legendary “smartest guys in the room” at Enron, holds up his federal prison ID, which he was required to carry during the more than five years he served in prison after he pleaded guilty to fraud.

“In 2000, CFO Magazine named me CFO of the Year. This is my actual trophy. I had to tape it together, it’s gotten beaten up. It used to have a star up there, but it fell off. So now it’s just giving me the finger,” Fastow told the Association of Certified Fraud Examiners (ACFE) at the Marina Bay Sands in Singapore.

“This is my prison ID card. Every inmate in the federal system is supposed to carry these at all times. Here’s the interesting thing – I got both of these for doing the same deals. How do you become CFO of the year and commit the biggest fraud in American corporate history by doing the same deals? Something doesn’t make sense,” said Fastow.

To recap – Enron was once one of the world’s largest energy companies and the darling of Wall Street. When it collapsed, it cost thousands their jobs and wiped out billions of dollars for shareholders and pensioners.

Fastow was the mastermind behind a supremely complex network of off-balance-sheet special purpose entities and shell companies used to conceal years of massive losses, leveraged on Enron stock, which eventually led to the company’s spectacular bankruptcy in 2001.

CEO Jeff Skilling is still in jail, serving 14 years, while chairman Ken Lay died before he could go to jail. Fastow copped a plea for a reduced sentence, pleading guilty to two counts of securities fraud if he testified against his former colleagues. He ended up serving five years in prison and now advises a law firm and gives occasional, pro bono, lectures on how to spot fraud.

“Every single deal I did at Enron was approved by the accountants at Enron, the outside auditors, the internal attorneys, the outside attorneys and the board of directors. How can you get approval from all of those people and still commit fraud?” he said.

Dealing with the smartest guy in the room, you have to be careful not to be lulled by his charm. Wearing a white shirt and looking fit at 53, Fastow comes across as genuinely contrite, and he has done time for what he did, whereas others who have carried out similar or worse transactions have escaped the same level of sanction.

He says he is ashamed. “It’s important that I recognise the damage that I caused and, although these numbers don’t look big after the financial crisis, they are big because there are people behind these numbers so when it’s $40 billion in lost market value, that’s $40 billion of harm to investors.

Fastow warns the gathered fraud examiners that finding transgressions is about more than making sure companies follow the rules.

“What I am talking about are people who technically follow the rules but undermine the principles of those rules. Is a loophole a good thing or a bad thing?

“Most people say it’s a good thing, especially when it comes to paying taxes. At Enron, I found every loophole in the finance and accounting area. My title was chief financial officer but I should have been called chief loophole officer. I undermined every principle possible,” he said.

He chose accounting assumptions and engaged in structured finance transactions that fundamentally changed how Enron looked. It basically made Enron look like a healthy company when it was actually seriously ill. To illustrate this, he said Enron was graded BBB-plus investment grade, but if you took away all the transactions Fastow did, Enron would have rated BB-minus.

“The way I looked at it, if there is complexity and ambiguity, it gives me greater latitude to do what I want to do. Never when I did these transactions did I think about the ethics. I simply said we have a rulebook, it’s amoral, just a bunch of rules.

“When you’re in the business world, it’s a lot harder to recognise unethical situations than you think . . . our financial statements were intentionally misleading. But did I think that was wrong? No. I was just following the rules,” said Fastow.

In 2000, Enron had $100 billion in revenues, $1 billion in net profit – he quips how he should put an asterisk there to say “if you believe the numbers” – and Fortune magazine named Enron the most innovative company in America for six consecutive years.

This meant that when Enron signed a long-term contract to provide power out of a new power plant still under construction, they immediately recorded all profits that were estimated to be made under the contract.

But the company got to decide itself what the price was going to be. As long as it wasn’t on an index, they could do a model on a spreadsheet, he said.

“It’s like crack. Once you do it, you have to keep doing it,” he said. “At Enron we called it ‘mark to model’ and people were incentivised to go out and enter into contracts for which there was no price on an exchange, because it gave the company the ability to make up the value.”

“It’s a pre-paid currency swap which doesn’t show up on any balance sheet. I still smile when I see deals like this. But then again I went to jail,” he said.

He shows a picture of himself being taken out of court to be taken to prison. He hugged his wife Lea, who also worked at Enron, and went to jail for a year, was handcuffed and had chains put around his waist and ankles.

“It took me a long time to be able to actually articulate what I had done wrong. Even though I pleaded guilty, it was hard to explain because every time I was doing it I would come around to say: ‘But they approved the deal’.”

Then, during one prison visit, his son was puzzled as to why he was in prison, if he received permission to do the deals in his job. It was the first time Fastow had to explain why he thought he should be in jail.

“So I told him a parable. Suppose when you’re 16, you go to a party using the car and the one rule is you don’t drink alcohol. The first thing is someone offers you a beer, and you say no, because the one rule is no alcohol.

“But what if you have a really clever friend, who pulls out a chewable tablet. This is a beer tablet, you can chew it and it’s the same as drinking a beer but you wouldn’t be breaking the rules. I asked my son would he do it? And he looked at me like I’m an idiot and said ‘of course not, because that wasn’t the point’.

“I said I’m in prison because I was the beer-tablet pusher. Every way I could find ways to follow the rule technically but undermine the principle of the rule, I did it. And because I did that, it caused a lot of harm and that’s why I should be in prison.”

“This is the global headquarters of one of the most valuable companies in the world, Apple Computers. Most people think it’s that really cool building in Cupertino. No. That’s the US headquarters. This is in Ireland, for tax purposes. Apple runs all of its non-US income through this building,” he said.

“US tax law says so long as income is earned outside of the US, if you do not bring it back into the US, you do not have to pay US taxes. You pay taxes in the countries where you recognise it [the income], in this case Ireland.”

Everyone in the room starts to laugh. “You’re all giggling, you’re laughing. If Apple did not do this, your iPhone would cost $2,000. They run over $50 billion of earnings through this building. Think about, from a tax standpoint, what kind of saving that is. It’s all value for shareholders. Is this a good deal for Apple? Everyone says yes.

“How is this deal any different from any of the others? This is a loophole. On this deal, you’re all giggling. It’s easy to trip and fall into rationalising certain decisions as being good.

“Once you rationalise this decision as perfectly fine, as being good for the shareholders, for the consumers, you’ve just crossed the threshold into a world where you’re saying it doesn’t matter what the principle of the rule was, as long as we are technically following the rule. Everyone in this room just crossed that threshold.”