Buyout strategies and debt were on the agenda 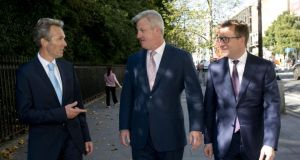 I hear Mergermarket assembled a high-powered coterie of corporate financiers, business executives and lawyers in the Shelbourne hotel on Thursday afternoon for its Deal Drivers Ireland conference. Buyout strategies and debt were on the agenda: serious stuff now that high finance is back in the big time. There is no truth to the rumour that some of those present asked for Krug on draught.

Star speaker, however, was Patrick Kennedy, the former chief executive of cheeky bookie Paddy Power, who is also deputy governor of Bank of Ireland. He regaled the room with tales of Paddy’s derring-do, such as its expansion in Australia and its football betting model based on 40,000 different matches. He also described its proposed merger with Betfair as “the perfect combination”.

Kennedy also revealed that the last time he was in the room, the Shelbourne’s main function facility, was the day he got married.