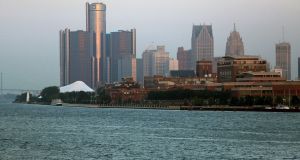 The fund raised almost €13 million from Irish small investors at the end of the boom, and initially invested in Germany before moving into the risky Detroit abandoned homes market in 2012. The Irish Times recently revealed that angry investors have been told by Bipep they are likely to lose 90 per cent of their cash.

Seizure records from the treasury authorities in Wayne County, Michigan, show the extent to which the fund’s investment strategy in Detroit has blown up in investors’ faces.

The latest seizure list, published about two weeks ago, details 80 Bipep properties, purchased through its US subsidiary Artesian Equities, which have been forfeited for non-payment of taxes.

Judicial foreclosure hearings will take place in Detroit next month, after which the houses will likely be sold to repay the debts. Many of the homes are in highly-deprived areas on streets scarred with abandoned homes.

The fund’s affairs in the US are managed by a separate company, Brendan Investments Property Management, which is controlled by Hugh O’Neill and Vincent Regan, co-founders with Mr Hobb’s of Bipep.

Mr Hobbs, who fronted the scheme’s public fundraising in 2008, stood down as a director of Bipep two years ago and sold his shares in the management company. He retains a 4.5 per cent stake in Bipep and is on course to lose most of the estimated €450,000 he personally invested.

Mr O’Neill, an accountant who conducts much of Bipep’s activities on the ground in Detroit, made no response to questions about the seizure of so many of Bipep’s assets in the US.

He did reply, however, to questions about allegations in US media that a Bipep-owned apartment block in a deprived Detroit district has left many of its tenants without heat over the winter.

Mr O’Neill purported to blame the situation on City Property Management, an agency that ran the apartment block for Bipep. City Property insisted it conducted its affairs properly, and alleged Mr O’Neill’s company did not provide enough funds for heating, which Bipep denies.