Seen and Heard: Public pensions to be on table in pay talks 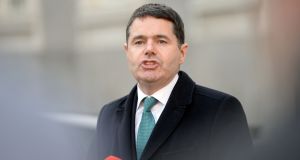 Minister for Public Expenditure Paschal Donohoe said any public sector pension deal would have to be affordable in long term. Photograph: Eric Luke

Public sector pensions will be on the negotiating table as part of a new pay deal, Minister for Public Expenditure Paschal Donohoe told the Sunday Business Post. In an interview with the newspaper, Mr Donohoe said any agreement would have to be affordable in the long term.

“As we move into 2017 and 2018 and beyond, it is already apparent that the value of public sector pensions has increased and the differential versus private sector [pensions] has widened. My department will be doing work on what is the future cost that will need to be met,” he said.

The Nasdaq-quoted group has sought permission to convert a unit in the Sandyford Industrial Estate into its flagship Irish premises, with display area, sales offices and repair centre. Tesla said it would then install supercharger stations in Dublin, Cork, Galway and Belfast that would allow owners of Tesla cars to charge their cars for free.

The body will comprise representatives from several Government departments as well as from public bodies and interest groups. It will examine how short-term lettings should be managed and regulated and report back by the end of June 2017.

Coveney’s department said it seemed “significant numbers of properties” were being taken out of the rental market and used for short-term lets, particularly in Dublin.

The new owner of Formula One, Liberty Media, is planning a clampdown on overspending by racing teams as part of an overhaul of the sport designed to make it more financially sustainable for smaller teams.

The Sunday Telegraph reports that Liberty Media, controlled by Irish-American billionaire John Malone, is developing plans to restrict the amount teams can spend, in the hope that it will reinvigorate competition on the track.

Previous attempts to introduce budget caps have triggered rebellions from the biggest teams, including a threat to form a breakaway championship.

The UK may need a transitional agreement to smooth its exit from the European Union, but it should not “buy back” into too many of the bloc’s regulations, British trade minister Liam Fox told the BBC.

Separately, the Mail on Sunday reported Fox believes trade with Europe will be damaged by Brexit, but this will be outweighed by greater trade with the rest of the world, citing sources saying he had described this as “Europe-minus” and “world-plus”.

1 Majority of employees don’t want to return to pre-Covid working patterns
2 Homeworking is depriving me of juicy gossip
3 If tourists are such pariahs should we not be testing them on arrival?
4 Primark rejects £30m bonus for bringing back staff
5 Tobacco giant’s menthol-ban substitutes take 5% share of Irish market
6 ‘My rent here is so low it’s a joke’
7 Varadkar and Donohoe to meet banks to discuss mortgage breaks
8 Investors in Irish solar energy fund in line for €20m payout
9 Norwegian airline sued in Dublin by inflight caterer
10 Construction activity rebounds as sites re-open
Real news has value SUBSCRIBE